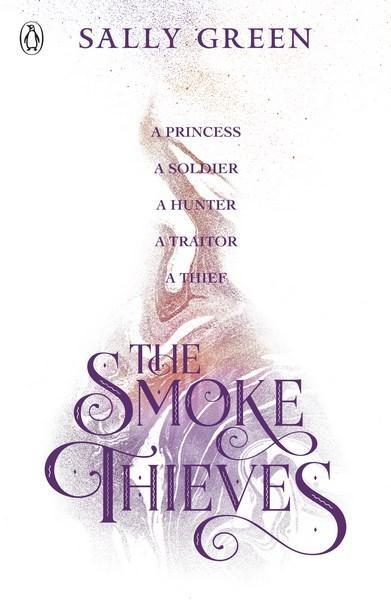 A cleverly woven tapestry of political intrigue, family rivalry and female subjugation. The Smoke Thieves is the first book in Sally Green’s new fantasy series, following on from the success of her Half Blood trilogy.

The Smoke Thieves is told from the perspective of five contrasting characters with varying plot threads twining together so cleverly that we progressively learn how everything and everyone is connected. A spirited princess whose father is plotting against her; her brave guardian accused of treason; a disloyal servant vowing to avenge the deaths of his family; a feisty demon smoke hunter; and a charismatic thief with a secret identity. Their lives intersect as a war between kingdoms becomes imminent and the dangerous truth about demon smoke links all their fates.

I enjoyed following each person’s journey and the gradual revelations of their connections to each other. We find ourselves travelling to three different kingdoms and learn how these environments and cultures affect each protagonists’ personality and morality: the warm and welcoming Pitorians; war hungry Brigantines; and the elusive people of the small kingdom of Calidor.

With a Game of Thrones vibe, the world and character building in The Smoke Thieves was well covered from the start but the story tended to peak and wane losing my interest now and then as the story seemed spread too thin across multiple characters’ points of view. This might be overwhelming for readers who aren’t used to trying to follow multiple perspectives.

The sense of romance was miniscule and the tension between characters and sense of urgency, instead of building and building to a traumatic and explosive finale, just fizzled out. There was some graphic violence, which I feel the author thoroughly enjoyed writing, but I felt no fear during these moments because the victims were minor, unexplored characters, not integral to the story.

The Smoke Thieves is set in a period when women were considered second-class citizens and expected to be subservient to men. With this in mind, I felt an affinity with two of the main protagonists: Princess Catherine and Tash. Catherine’s and Tash’s situations in life made them polar opposites.  Their characters were imbued with intriguing and endearing personality traits which we observe as they start developing self-empowerment and independent thought.

What I distress over in regards to this book, is that there are no happy families in this story. One family denounced a daughter as a traitor; another sold his daughter as bait for demon hunting; another used his daughter as a pawn in war games; a brother physically and verbally abused his sister; one father, although king, was decidedly absent from his son’s major decision making; one man disowned a child and abandoned it until his younger children were murdered and he needed an heir; a brother declares war twice against his brother; parents are not intending to attend the wedding of their only daughter; a mother spouts wisdom yet expects her daughter to settle for an uncertain future using her own loveless marriage as inspiration.

However Sally Green’s skill in creating vivid worlds and credible characters makes this an interesting new series. Not as good as Half Bad, in my opinion, but still worth immersing yourself in and will create discussion about females in society.

This book would be suitable for readers 14 years+