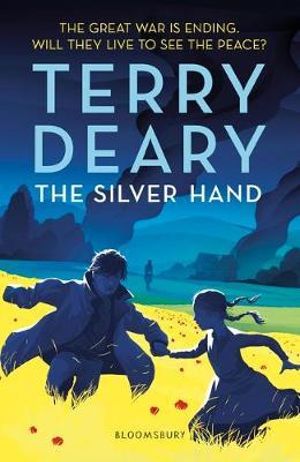 With the 100th anniversary of Armistice Day fast approaching, Terry Deary and Bloomsbury have released this novel, which covers the months leading up to the 11th of November, 1918, from the point of view of two young people – Aimee, a French girl, and Marius, a German boy. Marius is taken ill while the German Army is in Aimee’s village, and she and her mother nurse him back to health. While neither can speak the other’s language, they both know Latin and so use this to communicate. Once Marius is well enough to travel, they set out across war-torn France to get him across the Front Line and back to Germany. Unfortunately, Aimee and Marius have also witnessed a double agent at work, and he pursues them across northern France to ensure they are silenced forever.

While Terry Deary is a prolific author, this book has many flaws. The story and the plot devises are often implausible, the dialogue feels inauthentic and the supporting characters, including the children’s nemesis, are two-dimensional. Both Adolf Hitler and Manfred von Richthofen (the Red Baron) make unlikely cameo appearances. Criticisms aside, the book is fast paced and exciting, with assertive child protagonists, and will no doubt be enjoyed by its intended audience. It is an accessible text for engaging readers with the events of World War I and Armistice Day. Suitable for upper primary, secondary and public libraries.