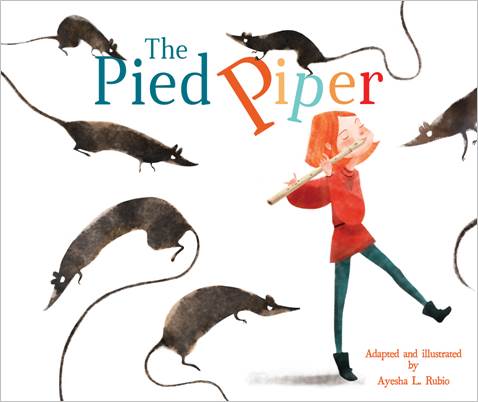 The legend of the Pied Piper can be dated to 1300 AD, where a stained glass window in the church in Hamelin, Germany, depicted the tale. The traditional story is dark, telling of a mysterious piper dressed in multicolours, who made a deal with the town’s Mayor to rid Hamelin of its rat infestation. Once the deed was done, the Mayor reneged on his promise, and refused payment. In retaliation, the Pied Piper returned while the townspeople were in church, and played a magical tune once more, this time drawing away all of the children of the village, except for three; one blind, one crippled and one deaf, who could not keep up. These three informed the villagers of their loss. In most versions, the children were never seen again, prompting some historians to believe it retells a real-life story of epidemic or perhaps a natural disaster such as a landslide.

This adaptation, retold and gloriously illustrated by Ayesha L. Rubio, introduces a lighter tone, taking what has always been a cautionary story about the importance of repaying your debts, and adding themes of friendship and reconciliation. In this version, suitable for children aged 4 plus, the Mayor still refuses to pay his promised fee, however, when the children disappear, he is run out of town by the children’s parents. Realising that the parents were not at fault, the Piper, the children and the rats all return to live in peace!

Rubio’s water colour illustrations fill each page gloriously, and the text flows across the pages in a clear and good sized font. Reading the book aloud is a pleasure. However, personally I found the ending a little twee. Part of the appeal of the Pied Piper was the sense of the mysterious, and while the illustrations capture some of this magic, the closure does not. Despite this, for younger children, it is far more appropriate than the traditional story. Older students would find a comparison between the legend and this new interpretation to be an interesting challenge. Although the story has been softened for younger audiences, it is still a beautiful book, suitable for any primary school library or personal collection. A tempting book trailer is available online to promote the book to younger readers.