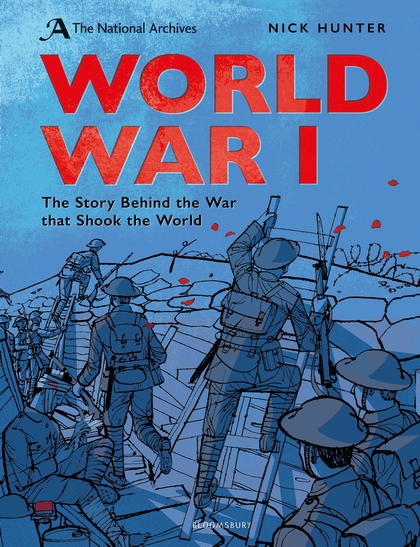 Subtitled “The story behind the war that shook the world,” this text gives insight into the political and social context of World War One. While chronological in its order, it is not just a litany of various battles, rather it delves into topics such as the reasons why the war began, trench warfare, munitions factories, propaganda, women in the war effort and the aftermath of the war. This broader, thematic historical approach gives a sense of how the war affected every aspect of life and involved the entire population in its scope.

Each double page opening is a new topic with a large heading and first paragraph in bold font that summarizes the subject. Extensive use of photographs, maps and documents adds to the sense of a well-researched book but with easy to read text suitable for upper primary and lower secondary students. Drawing upon the resources of the UK National Archives, it is also sprinkled with interesting facts and colourful reproductions of enlistment posters that bring alive the atmosphere and emotions of the time. To assist with research, at the back of the book there is a timeline of events, comprehensive index, glossary and suggestions for where more information can be found.

Printed on high quality, gloss paper World War 1 is an attractive and engaging text that will introduce young readers to the significant events and implications of the first global war fought on an horrific industrial scale and involving entire populations.