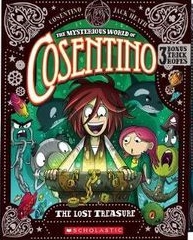 Since being a runner up in Australia’s Got Talent in 2011, Cosentino has become one of Australia’s best known and loved magicians. Now he has turned his hand to writing, and with the help of award winning Australian author Jack Heath has created a series called The Mysterious World of Cosentino. The two earlier books in the series, The Missing Ace and Rabbit Rescue have previously been reviewed here.

In The Mysterious World of Cosentino #3: The Lost Treasure, ‘Cos’ is trapped in a glass ball hanging over the ocean, about to perform for an audience. In order to escape he will have to undo shackles, a straitjacket and padlocks. But that is not the greatest danger he will face. The evil two headed king of Coppertown has arrived and is on a mission to find sunken treasure. In Coppertown, magic is illegal. Avoiding arrest, escaping the glass ball and stopping the king from taking the treasure – all while underwater- could be prove to be Cosentino’s biggest challenge yet.

This book is a fast paced, action packed roller coaster ride. Simple text, large font, plenty of illustrations (which reinforce and support the story line really well) combined with a splash of colour and varied spreads make for an interesting read that will hold the attention of even the most reluctant reader.

There is a healthy dose of humour in every chapter, too. From amusing puns (‘in a passing school, the teacher was telling off all the clownfish for being disruptive’) to similes (‘as lonely as a teaspoon in a knife drawer’) and downright silliness (‘the two whales…started slapping each other with their flippers.’) there us something to make everyone laugh. A large cast of quirky characters- including a padlock sidekick, an emotional anchor, two killer whales and a school of rude piranhas-will also keep children entertained.

Scattered throughout the book are ‘magical secrets unlocked’ snippets where kids can get an insight into how magic tricks really work. As an added bonus, each book in the series comes with materials and instructions to perform a magic trick from the story. In this case, three trick ropes are included.

The Mysterious World of Cosentino #3: The Lost Treasure is sure to appeal to children aged 7 and up, and is an especially good choice for reluctant readers.

Further information about Cosentino can be found on his website.