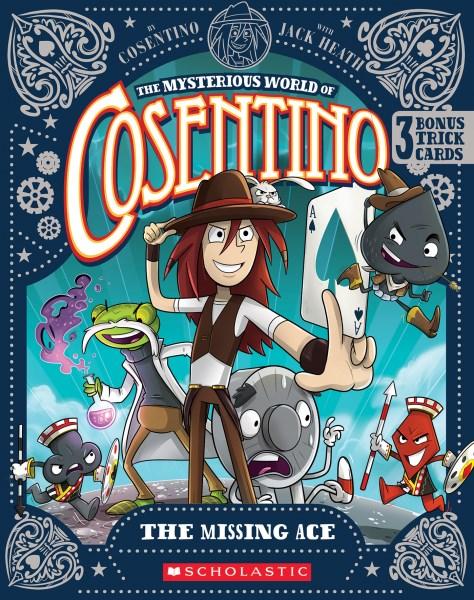 In the interests of full disclosure, the school that my children go to has a close connection to Cosentino, the world-famous illusionist, so the excitement has been high on the release of The Missing Ace. And I can tell you, with absolute certainty, that it has been a big hit particularly with the Grade One and Two students. My eight year old son, who is also fascinated with magic, illusion and sleight of hand, has already read The Missing Ace four times.

In Coppertown, true magic has been banned on pain of death by King Diamond, so Cosentino and his friends, Locki, Snuggles and Professor Camouflage, perform illusions and tricks for the audiences in his run-down little theatre. One day, the performance is interrupted by the arrival of the Ace of Spades, hotly pursued by Hollow, the king’s right-hand wand. Cos’ impulse to help Ace escape leads him into all sorts of trouble with Hollow and the king’s card soldiers, and he’s going to need all his skill and ingenuity to get himself and his friends out of a very tricky situation.

The story itself is a well-paced action adventure that keeps the reader engaged, and I particularly liked the way that the reader is given tips throughout the book on how various tricks and illusions are actually performed. This is done not in the spirit of breaking the magic, but in a way that engages and invites the reader further into Cos’ world; budding young illusionists should find much to enjoy in these asides, from the thrills of the shark tank escape to the mystery of the disappearing clock.

Cosentino himself has frequently talked about the difficulties he had learning to read when he was young, and how the right book – an illustrated book of magic – led him in the right direction. He places strong emphasis on the power of reading, and learning to love reading, and The Missing Ace is set to encourage that love in young readers who are starting to gain confidence in their reading, but who perhaps need a little more substance in their stories. Readers who are confident with the level of, say, the Zac Powers books, should have no difficulty with The Missing Ace.

The characters are fun, quirky and original, from Locki the lock, who is an expert at lock-picking, to the weird and sinister Puzzler, and the enigmatically helpful Princess. There is also the occasional wink to the adults reading along with their children, who are more likely to get the real joke of the characters like Eighties, who wears a single glove and says odd things like ‘Rad!’

The heart of Cos’ adventures is the idea that skill, ingenuity, courage and kindness will win the day. There is the rather obvious message in the fact that you can tell who is good  – only the good and kind at heart can resist King Diamond’s hypnotic control – but Cos also resists the temptation to make an easy escape in order to do the right thing and fulfil his promise to save everyone trapped in The Arcade. As a result, Cos pulls off his greatest trick yet… until the next book!