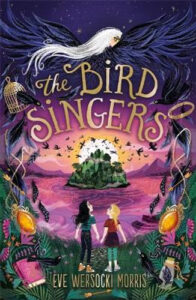 This is the debut novel from a new English author. Her fascination with European fairy tales shows throughout this story. Unhappy with a move to the country in the Lake District of England, Layah, who is almost 13, is critical of her mother for taking them and for her father for not being there.  She misses her Polish grandmother who was a renowned folklorist and used to tell Layah and her sister stories. She is both intrigued and frightened by the strange sounds she hears on the first night and even more frightened when she sees a strange old woman with yellow eyes in her garden.  Why is her mother acting strangely? Who is the strange woman?  As she is unable to get any answers from her mother, Layah sets out to solve the mystery herself. She eventually enlists the help of her little sister and a local boy, James. There is a mystery about the local school, the caretaker seems strange and menacing and James and his father Henry seem above board, but are they really? Increasingly, Layah and her sister find it hard to know who to trust. There are many twists and turns in the story and even the reader begins to doubt many of the characters. Layah is attacked by someone or something and the only evidence is a bunch of purple-black feathers. There is a feeling of menace from the local birds and some of their aggression and behaviour is reminiscent of that of the birds in Alfred Hitchcock’s The Birds. Eventually the mystery is solved and the girls discover that not even their mother is quite what she seems.

A recurring theme is a particular poem their grandmother has told the girls, a poem that contains the clues to what is happening to them. In the climactic denouement, Layah must re-evaluate her father who has returned to the family and who shows unexpected courage when the girls and their mother are threatened. Folklore and reality are interwoven in the ending and the choices their mother makes will have far-reaching consequences for the family.

There is a dual narrative in part of the book with part of it giving the reader some backstory to what is happening now. But it doesn’t give away the mystery – it is only towards the end that the reader can weave all the parts together. This is an exciting and intriguing mix of fantasy and realism making Layah (and the reader) wonder if the stories of her grandmother might actually be true. It’s a real page turner and makes one hope that this isn’t the last we see of this new author.