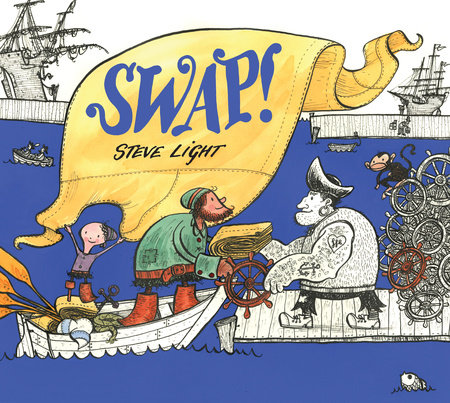 International award-winning author illustrator, Steve Light, previously known for titles as Have You Seen My Dragon? and Have You Seen My Monster?, lands this inventive and charismatic book on our shores; it’s Swap!.

The endpapers begin with an old sailor saying, “Don’t swap for fish that are still in the sea.” Alongside this is an archaic-looking map of islands, nautical oddments, mermaids and Loch Ness monsters, an indication of the industrious journey ahead. In the simple, repetitive and minimal language that follows, we are escorted around the land as one friend helps another to mend an old, dilapidated ship. And the method is straightforward yet requires great skill. A clever use of bargaining, negotiation and craftmanship bring together all the pieces required to repair, and even remodel, the sea voyager that is so important to its captain. Beginning with a modest button and a grand idea, a young peg-legged lad makes deals with the villagers to swap items of equal value, procuring the exact quantities needed to either use or upgrade for the next piece in his ship puzzle. Two coils of rope for six oars. SWAP! Then two oars for four flags. SWAP! And so the deals continue until a new ship is complete, anchors, flags, sails, wheels, figurehead… and a happy captain! Ahoy!

The illustrative combinations are the perfect anchor for the humble yet valiant nature of the story. The mixture of detailed black and white ink-pen background drawings amist the bold watercolours of the characters and their acquired treasures is visually captivating, as is the assortment of vignettes and double page spreads.

Swap! is a delightful and deceptively simple story of trade, with the underlying themes of friendship, creativity, persistence and BIG ideas. It is recommended for pirate-loving children from age three with the potential for numeracy development and the basic study on currency, commerce and occupation for slighter older readers.