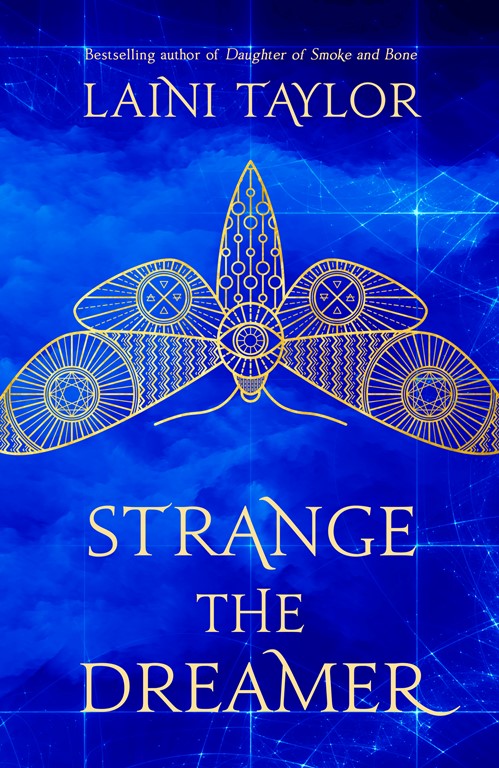 This new story by the author of the Daughter of Smoke and Bone trilogy started off as a single volume about a young woman, Sarai, who was the Muse of Nightmares, which was the working title she pitched to her publisher. As she was writing this novel she wanted to present Sarai as seen through the eyes of a stranger, a young man. Somehow this young man, Lazlo Strange, took over and became the main protagonist and hijacked the title. The result is Strange the Dreamer, a wonderfully long (over 500 pages), complex and satisfying read with the added bonus of more to come.

It is set in a world fifteen years after a battle between gods and humans where humans won but people are still dealing with the aftermath of their long enslavement. Unknown to them some offspring of the gods have survived hidden away. Sarai is one of these children of the gods, the product of a union between a goddess and a man. She lives a precarious existence with a few half siblings, each of whom have a special gift. Sarai’s gift is the ability to send dreams or nightmares to ordinary humans who are unaware of her existence.

In another part of this world lives Lazlo, an orphan, brought up by monks who have given him work in the library. He is a dreamer, engrossed in tales of long ago and far away, which may or may not be true. He is a gentle, kind person, impractical, abstracted, in love with the unknown.  One of his main obsessions has been the mysterious city of Weep and when a group of warriors come from that city seeking help for a problem they will not name he joins them. It is inevitable that he and Sarai meet and fall passionately in love. Taylor has said that the character of Lazlo is a love letter to all fantasy readers and making him a librarian was a kind of tribute to the world of books. He does have his nose broken by a book of fairy tales that falls on his head – maybe it’s a metaphor for impact of the world of fantasy on our mundane real world?

This is fantasy of the old school – Taylor creates a world both rich and strange in terms of creatures, people and places. Her world building is superb. The book is lush with description that gives depth and colour to the story.  It is easy to imagine this place and to visualize the people and creatures that inhabit it. The star-crossed lovers theme is given a completely different twist and is written with a delicate touch from the first tentative encounter to the heartbreak and anguish that follows. It is much more than a simple love story though, there is greed, ambition, revenge, and lots of mystery. It is in its own way a plea for tolerance of difference, for understanding and forgiveness of wrongs done, and an exploration of otherness. Fantasy is a useful medium for this type of writing in that the author is not bound by a particular historical tradition but is free to be guided by inspiration, although, as Taylor has said, ‘we are still working from a pool of what we know as human beings’.

The ending of the book leaves you a bit stunned, but it is a satisfying place to pause the action while you wait for Taylor to finish the second volume. She has said in various interviews that there will be further elaborations and new characters in the sequel.  My prediction is that it will go to a trilogy. People are now so accustomed to this format and are eager to spend more time in a favourite world. I am sure that Laini Taylor has the imagination and the talent to succeed if this splendid first volume is any indication. Recommended.