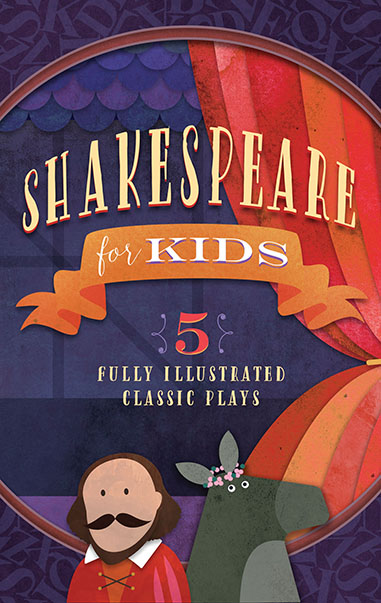 A fabulous concept, this neat box set contains abridged story versions of the five plays listed above. Designed to introduce primary-aged kids to Shakespeare, each book includes a short biography of the bard.  Each story begins with a character list; detailing their personality, family relations and (where appropriate) who they are in love with. The character descriptions also include a precis of the character’s plot-line which will help kids with comprehension.

In some parts, famous quotes from the original plays have been inserted. For example, in Macbeth the famous lines from the witches ‘Double, double, toil and trouble. Fire burn and cauldron bubble.’ and Lady Macbeth ‘Out, damned spot! Out, I say!’ are included.

However, given the aim was to make Shakespeare accessible for kids, the language in some parts seemed unnecessarily convoluted and leaden. For example, from Macbeth: “After greeting one another, the soldiers informed Macbeth that since the Thane of Cawdor had betrayed King Duncan and led his armies against him, the king had declared that he would be hanged for treason.”

The books are enhanced with gorgeous colour covers and black and white line illustrations.