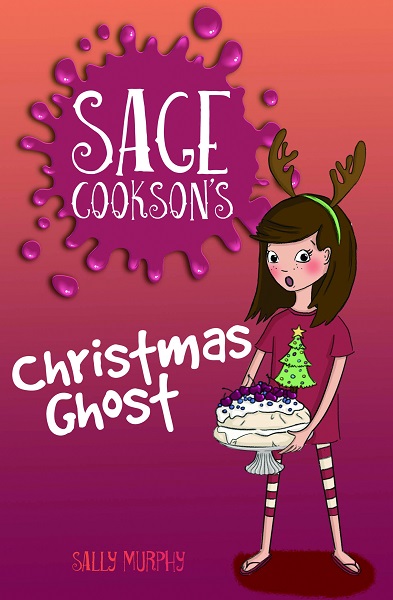 Sage Cookson, 10, doesn’t go to school. Instead she travels around with her celebrity chef parents, while they film their television cooking show. In the latest book, number six in the series, the family is off to Perth to film a Christmas special – a world record attempt to make the biggest ever pavlova. The attempt is taking place at a former Brickworks, using its huge ovens to bake the meringue. But the Brickworks is supposedly haunted and strange things have been happening. Sage is curious and investigates.

This is the first book I’ve read in this series and I like its distinctly Australian feel. As well as describing Perth landmarks, there’s friendly rivalry between Australia and New Zealand over the origin of the pavlova (that famous Australian dessert). And the Cookson’s assistants sport the typically Aussie names of Sheila and Dave.

Sage is a likable character with an unusual lifestyle to intrigue young readers. She’s helpful and clever – and she has her own mobile phone!

At the back of the book, there’s a recipe to make pavlova, just like in the story, information about the author and pictures of the other books in the series, which, as a mum, I find particularly helpful. My girls, 9, are always asking me to find them more books from the series they enjoy and it’s useful to be able to tick them off in order.

The Sage Cookson books are just right for newly-minted readers, with large type and short chapters with cute illustrations at the start of each. I expect they would be enjoyed by fans of the Billie B Brown series (by Sally Rippin) and the Ella and Olivia books (Yvette Poshoglian).