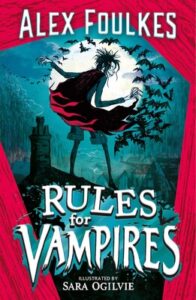 Lady Elonore von Motteberg (aka Leo) is trying hard to be a good vampire. There’s just so many rules. And pressure. She really wants to be a good vampire, but, well, she’s just not that good at doing the things she should be doing. Plus, her mother’s position on the Council means Leo’s actions are closely scrutinized. All the more reason for her to succeed on her Birthnight Deadly Hunt. Except, when the Hunt does not go to plan, two very bad things happen: Leo rouses a ghost, and then she awakens something much, much worse.

Leo’s imperfect and often disastrous attempts at being a vampire are a hilarious look at growing up and trying to fit into a pre-determined mold.  Sara Ogilvie’s gothic illustrations capture Leo’s coming of age plight with perfection.

Freakishly fun and delightfully gruesome at times, Rules for Vampires is perfect for younger readers who enjoy a bit of bite in their books.