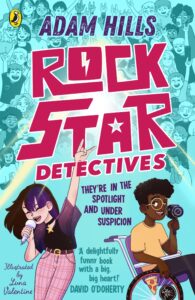 Suspend your disbelief at the door, and settle in for a rollicking detective story as twelve-year-old singing sensation Charley and her best friend and comedian George are accused of stealing priceless artefacts that have gone missing in every city that Charley has performed in.

Is it the jealous rival who seems to know more than she should about the crimes? Or the red-haired girl who keeps turning up wherever they go? Or is it their manager, who’s been mysteriously disappearing at night? Worst of all, is one of them trying to frame Charley and George for the crimes? They have to work out who really did it before they’re arrested, or Charley’s tour is cancelled.

Charley and George methodically compile the clues, and the reader is drawn into following their thought processes as they try to work out who the suspects are, what their motives could be, and, most importantly, how could they possibly have done it. Their reasoning and logic is solid, even if the reader is required to suspend a certain amount of disbelief at the unorthodox procedures of the police and other adults in the story. Within the context of a fun story full of wish fulfillment aimed at a ten- to thirteen-year-old audience, I easily kicked back and enjoyed it.

Given that the author is Adam Hills, comedian and host of the award-winning TV show The Last Leg, it’s not surprising that Rockstar Detectives is so funny. I found myself smiling over Charley and George’s narrative voices, and the way they phrase things. It’s also not surprising that George’s big dream is to become a comedian, and the way that Charley and George support each other and promote each other’s talents is delightful. The strength of friendship and the value of working together is a solid thread throughout the book.

The narrative is solidly focused on the mystery, but the moments of action are always thrilling, and George’s death-defying wheelchair chase after a suspect is a standout moment in the book.

Being in a wheelchair doesn’t slow George down, and the question of different abilities is handled in a matter-of-fact way throughout George and Charley’s story. Hills’ own experience with disability has given an insight to the story, and I particularly appreciated that among the facts about the places they visit and the artefacts they research, we get a note about how accessible the Colosseum is.

Rockstar Detectives has a little bit of everything; from crime-solving to information and reflection on art and history, and some interesting insights on social media and its impact on creativity and promotion of artists. All wrapped up in the funny, wry observations of two talented twelve-year-olds. I hope we get to see more of Charley and George’s adventures.