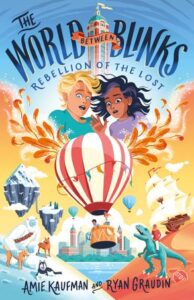 Objects and people go missing every day, all the time, all over the world. And if enough time passes, even buildings and geographical landforms are lost to our ever-changing planet. In this adventurous series there is a place where lost things can be found, The World Between Blinks.

This second installment follows the journey of Marisol, her brother Victor and cousin Jake as they step through the fold into the World Between Blinks. It is a very different place from the domain they encountered before. Obsessed with order and systems, the Curators led by the Administrator, did not take lightly the intrusion of Marisol and Jake into their world in the first book. As a result, they have pursued a level of order that has restricted movement and eliminated the rights and freedoms of the residents. Marisol, Jake, and Victor embark on a fast-paced adventure to help the people regain their freedom.

They join a resistance led by none other than the formidable Queen Nefertiti, a trailblazer who is determined to allow uncertainty, creativity, freewill and anarchy to reign supreme. In the struggle for power, chaos versus order, our intrepid adventurers come to realise that neither one nor the other should be dominant. Instead, a fine balance between the two is required to bring peace, safety and happiness to the World Between Blinks.

When the Administrator confiscates Queen Nefertiti’s memories, leaving her almost catatonic, Marisol uses her magic ability to find lost things to locate the rumoured Rocket, the only weapon that can stop the Administrator. With twists and turns, double entendre and unimaginable deals promised, The Rocket is found and is not at all what is expected.

The beauty of this series is its ability to bring to life the characters, vessels, structures, flora and fauna of history that have captured the imaginations of generations across time and space. From Herr Leichhardt, an adventurer who went missing on an expedition in Australia and whose disappearance lead people to search for him for nearly a century, to Amarna, an ancient Egyptian city lost to the Sahara desert, Kaufman and Graudin have not left any mystery unturned. Harold Holt, Alexander Helios, the Mayflower donut, the Tybee Island bomb, the top of Vesuvius and Reese’s Bites! The abundance of lost treasures will drive any reader to seek more information, to go off on research tangents and discover the story hinted at so cleverly by Kaufman and Graudin. To nudge readers to step into this journey, the book ends in a series of Curator files, detailing the ‘lost’ people, places or things from the story.

Kaufman and Graudin have also cleverly enticed readers who are not familiar with the series to pick up this second book by including a succinct “Curator Report’ as a prologue, detailing the adventures of Book One.

With strong character development, magical themes, powerful historic knowledge and pearls of wisdom throughout, I highly recommend this book to all adventure lovers 9+ years.