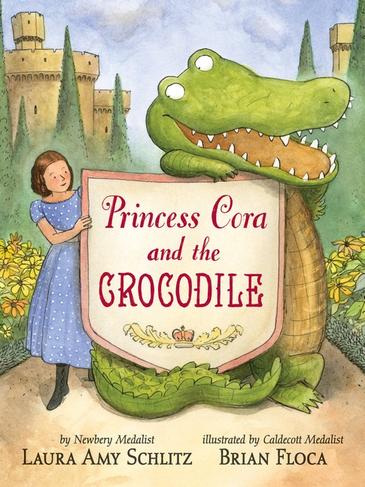 When Princess Cora is born her parents think she is perfect in every way, but they are worried about how she will be able to rule a kingdom. So that very day they start teaching her to be a successful monarch. By the time she’s seven, Princess Cora doesn’t have a free minute in the day. If she wasn’t having one of her three daily baths then she was being taught from books by her mother or being forced to skip rope in a circle in the dungeons by her father. One day Princess Cora has a new thought – what if she had a dog? A beautiful golden dog she could play with. She asks her nanny and her parents, but they all say no. So that night Princess Cora writes to her fairy godmother and asks her for a pet. The next morning there’s a box waiting in her room, but it isn’t a beautiful golden dog. It’s a loud, assertive crocodile who’s here to give Princess Cora a day off.

This is a funny, entertaining romp, and children will no doubt delight in the rebellious and revenge-taking crocodile. Princess Cora, after leaving the crocodile in her place and running away for the day, comes back in the afternoon to set things right and to have an honest conversation with her parents and her nanny. By stating her case calmly and truthfully she convinces the King and Queen to let her have a more balanced life, with play time, reading for fun and a golden dog to play with. Recommended for primary school and public libraries.