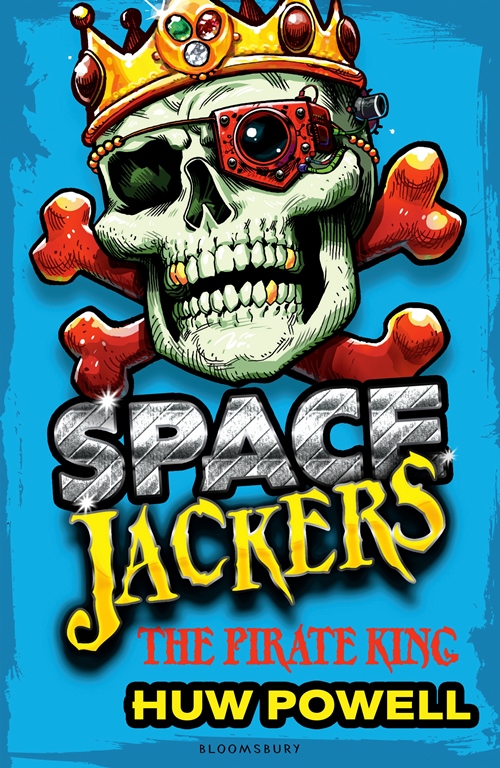 The Pirate King was a fun read, a space opera packing plenty of action, sharp turns and wit. If I were a betting woman, I’d put my money on author Huw Powell being a fan of Star Wars and Joss Whedon’s Firefly tv series.

The Pirate King is the third and final book in the Spacejackers series. There was enough background given within the story that I could keep up, but I’m keen to go back and read the adventures that led up to Jake “Kid” Cutler facing down the forces of the Interstellar Government with a golden cutlass in one hand, a laser pistol in the other, and a motley collection of space pirates, aliens and rebels at his back. As Jake tries to stop Admiral Vantard from taking over the galaxy, torturing his friends, and destroying his home planet, he comes to learn that leadership has its price. And epic space battles ensue.

The pace of the action doesn’t let up, and the battles are fast and furious with many twists, reversals and daring deeds. This will be a fantastic book for readers who like headlong action with a few well-timed moments for Jake to consider the implications of what he’s doing, and regroup. And in the midst of all these battles, Jake still has a mystery or two to contend with, and the secret of the hidden planet Althus to keep. Will Jake the Pirate King of Althus hold onto his crown and save the galaxy, or will Admiral Vantard win the day?

The humour walks a nice line with a few broadside nods – one of the characters, for example, is an alien called Nanoo, whose Uncle Morc comes to their rescue – without tipping over into slapstick comedy. There is a wide cast of colourful characters, and I became particularly fond of Crazy Kay Jagger, the pink-haired captain of the Divine Wind.

All in all, I thoroughly enjoyed following Kid Cutler and his crew through their swashbuckling space adventures, and I’m sure that readers aged 10 to 14 who like their action with a splash of humour and a heaping helping of space opera are going to love this series.

For it is, it is a glorious thing to be a Pirate King!