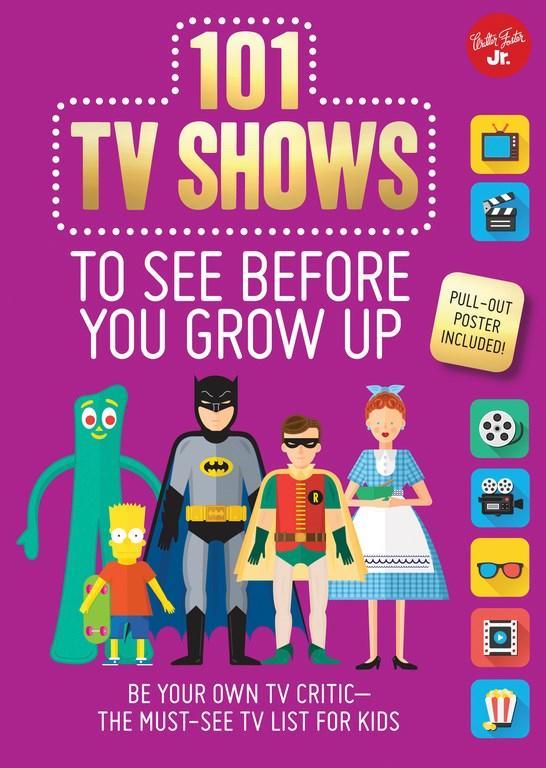 This book was a trip down memory lane for me. There were many TV shows that I grew up with in there, and a few more recent shows that I’m deeply familiar with now after listening to my sons tell me ALL about them in great detail. For a young TV fan or budding critic, this book could be an interesting read. For the grown-ups, this is both a reminder of shows that they’ve enjoyed and may like to track down and share with their young ones, and a pointer for TV series that they might not have encountered.

There are a broad range of TV shows listed in the book, and it is very American-centric, which is understandable given that it is an American publication. There are a small number of British shows, a couple of Canadian shows, and only one Australian TV show – The Wiggles.

Each entry is set out in an easy-to-follow visual manner, with information on genre, appropriate age suggestion, number of seasons, and starring actors. There is also space given for the reader to include their own information and rating of the series.

The information given on each show is interesting, and I particularly liked the “Did You Know…” facts given for each one. I picked up some fascinating bits of information, such as ‘Did You Know? While there was a camera in the Brady bathroom, the network censors never allowed the toilet to be shown.’

There are age guides given for each series, but as a parent I was interested that some of the TV shows chosen for older viewers (age 10-14), such as Buffy the Vampire Slayer and Monty Python’s Flying Circus, don’t give clear information that there is, for example, levels of adult content and violence that may warrant closer attention by parents. As well-chosen as these TV shows are, I would suggest strongly that parental involvement and awareness of viewing choices are still needed, and that the descriptions should not be taken as gospel.

All in all, however, this book could be a fun starting point for kids and adults of all ages to explore some interesting TV together.