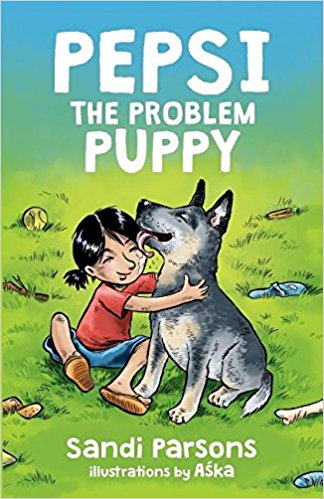 There is just so much to love about this book, but most of all it is a lesson in patience and responsibility for any young person wanting a puppy or something else entirely.

Rosie is an energetic young girl who has a younger brother she wants to keep out of her room, and a deep longing for a puppy. Her father Dave surprises her one morning when he tells her that he and her mum are considering a rescue dog instead of a puppy. Her mum is as clear on what she wants in a dog as Rosie is, and a puppy might not suit everyone’s needs. But Rosie is thrilled at the prospect of the dog and eagerly awaits her father’s return from the pound.

And this is how Pepsi comes into their life. Pepsi is a joyous, fun, naughty, but loving, 8-month old Blue Heeler who is at heart still a mischievous puppy. She doesn’t follow instructions and despite Rosie’s attempts to train her, Pepsi doesn’t listen easily, much to her mum’s displeasure the results include destruction of her garden and flowers.

One of the wonderful things about this book is that Pepsi is a rescue dog and Rosie’s dad does an awful amount of research into what would be the best dog for his family before the decision is made to get the dog. This will let young readers know right from the outset that getting a dog for a family is a complicated issue, more so than they’d realise. Also – rescue dogs. We’re getting into the Christmas season and without fail, I have read stories every year about how many animals are given up to shelters over this season – it’s a lesson we still have to learn in Australia – to adopt, not shop.

Rosie takes her responsibility for Pepsi seriously, working hard to train her in her own way, and worrying about how Pepsi keeps making her mum angry with her disobedience. The book acknowledges the parents’ role in getting a pet, and the big decision it really is for the adults too. Rosie’s mum may grow angry with Pepsi, but it’s not without merit, which is an important part of this story. It’s easy to dismiss a parent for being mean for not allowing a pet, but there is often good reason and here kids are taught to look beyond the surface for reasons.

However, parents aren’t by default mean and the book ends with a measured discussion about keeping Pepsi, and the responsibilities that come with her. It’s a wonderful lesson in love and looking beyond the surface of a naughty dog to the loyalty that lies beneath the slobber!