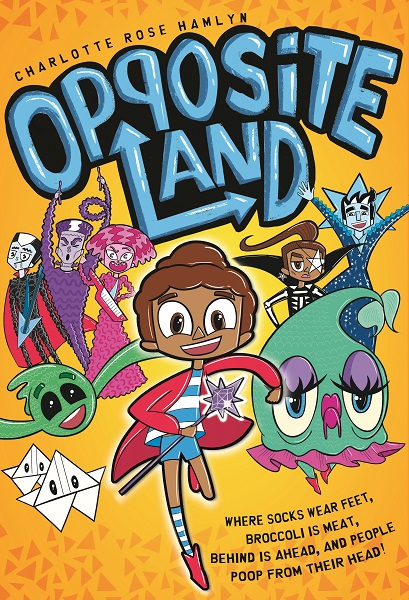 Both my 8-year-old girls picked this book up and read it cover to cover. They said it was “ridiculous” and “funny”, particularly that people in Opposite Land “pooped ice-cream”.  It’s not really my kind of story, but I really don’t think it’s aimed at me!

The cover is bright and enticing and in graphic novel format, so it presents like a comic, packed with pictures to draw in emerging or reluctant readers.

Stevie has had a rough first day at her new school. She compromised herself to fit in and feels so bad she just wants to eat ice-cream for dinner. Her mum, of course, says no way – ice-cream for dinner would only happen in Opposite Land. She hands her daughter a book of the same name, which her Grandfather had written to cheer her up when she was a child.  Once Stevie starts reading, she’s magically transported to Opposite Land and it is crazy. The Emperor Never has taken over and thrown everything scary into the Never. While at first it seemed like a good way of dealing with fears, this almost destroys Opposite Land. It’s up to Stevie to save Opposite Land and everyone who lives there and learn a few lessons about herself along the way.

At the back of the book, there are instructions for drawing some of the key characters, tips for drawing your own comic and how to make an origami army – “origarmy” – fun, age-appropriate activities to extend the enjoyment of the book.