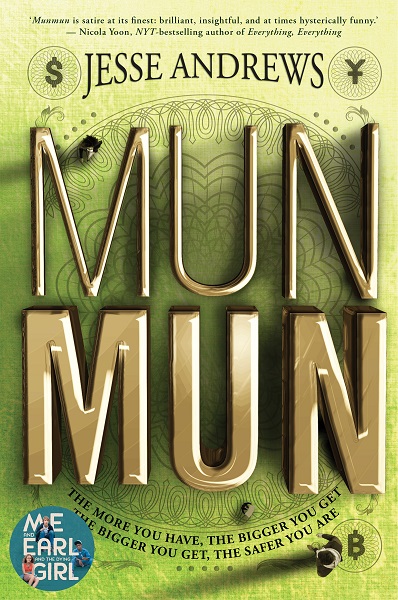 This quirky young adult novel depends for its success on the author’s command of voice, his wit, his imagination, and his satirical flair. On every count Jesse Andrews has notched up a success with this novel. The premise of the fantastic story might have resulted in a messy and deeply confused parody of inequality in modern society, but Jesse Andrews keeps the plot moving and the characters alive, and he keeps his invented world detailed and consistent enough for us to accept it wholeheartedly. The novel is very funny, and it is very disturbing as well. It is the kind of novel you can read for fun, then have a serious discussion about.

In this world, people without wealth are tiny, while those with wealth are grossly huge. Of course there many ‘middlerich’ sizes in between, some of them probably ideal. In this world, it is almost impossible to get oneself wealthy enough to become ‘bigrich’, once you are tiny. At the beginning of the novel, Warner and Prayer are the children of a family so ‘littlepoor’ (tiny) that they can manage to live inside a milk crate. In the first sentences of the novel, a middlerich kid stumbles on the crate and crushes their dad to death; not long after this a cat snaps their mother’s spine. These children are cast out into a world where inequality is stamped into the physical size of every person. How will they survive? Can they increase their size (often only possible at the expense of someone else’s size)? In some ways it is not so different to the actual world we live in, where difference is marked by physical attributes: Westerners do tend to be obese, the rich do tend to wear sleek clothing or surround themselves with expensive cars, and tend to look as beautiful as surgeons and dentists can make them look. In other ways the novel is a grotesque parody of our actual world in its inhuman determination to support inequality. You see, it is easy to get into the serious stuff when discussing this novel.

Warner is the character at the heart of the novel, and he is smart enough and dumb enough to do the unexpected and to make many mistakes along the way. Will Prayer, his sister, be able to ‘scaleup’ by trapping a middlerich husband, would Warner ever find a middlerich wife? There is a kidnapping, a shootout, a long prison stretch, the intervention of a doubtful philanthropist, and more in this adventure. You will enjoy the ride and you’ll want to ask big questions about life and society afterwards. Good for twelve year olds onwards.

Teachers’ Tips and other supporting material can be found on the Allen & Unwin website.