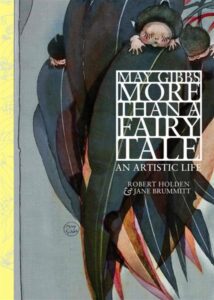 Older Australians probably grew up on Bib and Bub and the bad Banksia Men but sadly modern young readers may well have not heard of them let alone their creator, May Gibbs.  This wonderful production aims to set alight the dim memory of this extraordinary talented Australian illustrator and writer.  May Gibbs shone brightly in the first half of the twentieth century not only as an illustrator of children’s books but also adult publications, particularly the media.

Considerable research and detective work has gone into this book, as illustrative material has been found in the most unlikely places, all joined together by fascinating insights into the life and times of May.  The reader will discover her early life first in England, then Western Australia, London and finally Sydney as she engaged in the suffragette movement and Australia at war amongst other world changing events.

The focus of the book is primarily on Cecilia May Gibbs’ developing talents as a creative genius until the 1920s and, given that she died in 1969 at the age of 92, it will need a further volume to trace her later life.  Full page illustrations as well as small vignettes work their magic on the reader and so it is not a book to be missed.  My only concern is the small size of the font, which against the glossy papers makes it a struggle to easily read.  This, however, is a minor irritation given the totally absorbing material contained between the covers.  A satisfactory index is also to be found.

Not All Heroes Wear Capes