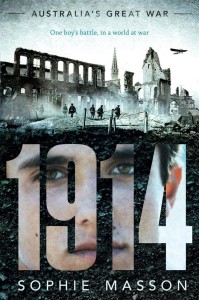 Both these books aimed at readers in mid to late primary school commemorate the contributions of Australians and New Zealanders to a war that devastated Europe and took, eventually, the lives of 8.5 million soldiers, with more than 20 million injured.  There never can truly be victors after such a conflict, only the long slow recovery that we know was tainted by bitternesses and resentments that helped fuel another World War.

Both Sophie Masson and Susan Brocker are superb YA novelists, and their books are powerful, compelling, compassionate and finely judged.  Sophie Masson’s version of 1914 takes up the story of two brothers, Louis (16) and Thomas (19) who happen to be living with their diplomat-career parents in Vienna at the time of the assassination of the heir to the Austrian throne.  Both brothers are smart, interested in the world, and ambitious to write.  They are ideal young characters to witness these events and help the reader make sense of them as both history and as part of the maelstrom of contemporary events around the boys.  It is a challenge to explain simply and dramatically to young readers why such a major war erupted, and Masson does a mighty good job of it.  The novel follows the first year of the war as Germany won many battles against the general expectation that they would quickly succumb to the forces of the Entente Allies.  Instead, by the end of 1914 both sides had entrenched themselves behind barbed wire, artillery and machine guns.  While Louis takes up a role as a reporter, Thomas enlists as a soldier.  This gives the novel an opportunity to allow us to see a range of battles, the deteriorating situation, and sometimes to glimpse how the war might be experienced from the other side.  Sophie Masson does not fail to make it clear to the reader the effects of young lives lost, of injuries that maimed people for life, and of the emergence of trench warfare.  Interestingly, we learn of the intricacies of Allied attempts (especially British) to control the news that came from the front line.  Like all wars, this one was fought hard across the territory of propaganda as much as it was fought in the mud and trenches.  This is a superb novel, managing to be sensitive and exciting as a narrative, while also being respectful of the larger history it is touching upon. 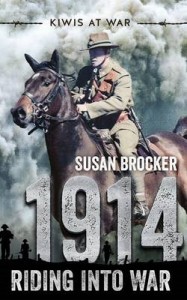 Susan Brocker’s novel is equally accomplished, and entirely different, thanks to the details that she has chosen to follow.  This novel follows the experiences and the fate of the Mounted Rifles Regiments gathered from New Zealand and Australia, and transported by ship across the Indian Ocean to Egypt, from where some of the soldiers were taken on to Gallipoli.  The novel follows the exploits of Billy and Jack.  The novel is well paced, allowing the reader plenty of pages where we can come to know these characters, their home life, their love of horses and knowledge of the beasts, the context of army life, its demands and its sometimes prickly camaraderie.  Each new shift, from New Zealand, to the cramped and dangerous life on a ship where the horses suffered greatly, to life in the sands of Egypt, and finally to Gallipoli, are depicted with increasing detail and intensity until we are right there with these characters fighting as much for their own survival as against the Turks on those hellish shorelines and slopes.  The novel does not at all offer gratuitous adventure, or unnecessarily gory detail, but it is clear with the reader that this was no boys’ adventure, it was a disaster almost unimaginable in the unfolding.

These are two impressive novels that begin a series over the next four years, a series that will trace each year of the Great War through the experiences of a variety of young characters, under the hands of a variety of writers.  If the future novels are anywhere near this standard, then these sets will stand as examples of how fiction can intelligently and powerfully serve history, and how history can be the stuff of powerful fiction.