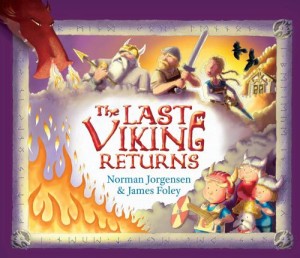 A very humorous account of two worlds colliding: the mortal and the Viking Asgard.  Young Josh, alias Knut, must look after his younger twin siblings at the Viking theme park but Odin and the other Viking gods get caught up in the problem that occurs when the twins go berserk.  Fortunately Knut sorts out the mess and saves the twins from a fiery death.

Not only is the simple story full of action but the full colour animated spreads further make this book an exciting adventure for the reader.  The front end paper brings the theme park alive with its keyed map while the back end paper offers a runic alphabet and code for the more advanced reader.  This landscape production will be a sure winner with young readers up to middle primary and perhaps beyond.