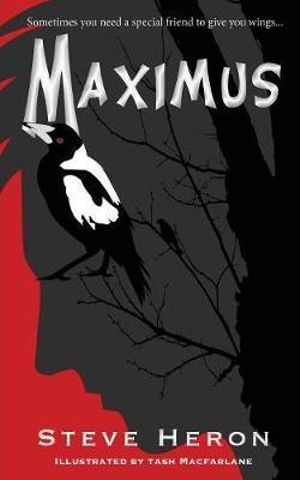 Mitch is a Year Six student and everything sucks. He writes poems about how everything sucks, in fact. He is being bullied at school, and he’s no longer close to Ryan, a good friend. He sucks at footy in some ways, and while he is good at the game in other ways, it’s the sucky part that sticks with him.

Stuff is happening with his parents – they are always fighting, and in particular his Dad seems to get angry at every little thing. He doesn’t understand why his Dad is like this, and he can tell that his Mum wants to help him, but his Dad isn’t open to that help.

So when Mitch inadvertently injures Jason, the boy bullying him, things come to a head at school. It’s the accumulation of the different things happening at home and at school, but Mitch knows he’s in the wrong and apologies to Jason. It’s then that Mitch begins to open up to his school chaplain and admit he needs help.

Through all this, in his backyard he has Maximus, a magpie with whom he makes friends. It’s almost as if the backyard becomes his oasis in a world where things are just all wrong for him.

This is a book about allowing kids to feel all the things that it’s not “cool” to feel – being bullied, being worried for your parents, and not understanding why you’re feeling like everything is going wrong. It’s also a book about asking for help, and about being unafraid to have these feelings of loss, and anger – at your friends or your parents. Mitch is given some excellent advice and coping mechanisms, and the author presents this in a way that young readers are going to love – if Mitch can write a poem about how everything sucks, and it’s essentially a list of all the things that suck… and it makes him feel better, then young readers can too if they need to.

The resolution of his parents’ issues is particularly important too, because like Mitch, his Dad final recognises he needs help and starts talking to a counsellor, which makes a difference to their home life immediately. Young readers will see that adults need the same sort of help they might too, and that for young and old it’s okay to ask for it.

There are lovely friendships, and even an examination of ANZACs and what it means to Australians to honour that history in Maximus. I liked that the author acknowledged refugees in the book as well, by having a young Asian classmate of Mitch’s relate how her family was affected by war as well, and her experiences as a refugee. I almost think there are so many important issues the author tackles in this, that it might be a better read, if some were saved for a second book.

I can’t finish without mentioning the lovely illustrations, which will resonate with young readers as they will see their own messy rooms, backyards and family dinners in them too!