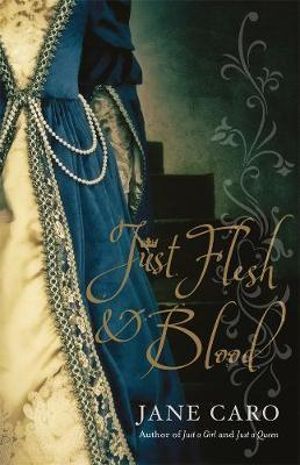 This is the third in the Queen Elizabeth series by author Jane Caro and is written from Elizabeth’s point of view on her deathbed. Elizabeth looks to her past, to the choices she’s made with the people around her, men and women who she favoured and thought fondly of.

This isn’t a book to review easily because as the third in the trilogy, there are times I felt that Elizabeth was a very remote character, and the book an interesting history text, albeit in a different way. I suspect this is so because her journey spans three books, and I realised that to appreciate Elizabeth’s story, readers will have to start at the beginning of this series. Just Flesh and Blood is very much a conclusion, and I think without the knowledge of the girl that came before, what readers will find is a Queen from history, and not a woman they should understand. I wanted very much to empathise with Elizabeth, to be engaged with her character her, but this book makes it very hard to do.

It’s clear that the author has done her research, for there is a wealth of detail about her relationships – political and personal. It’s interesting to see how she had to be ruthless, for she was the Queen of England, but to some in her court she would always just be a “king in petticoats” – and that is something that comes through clearly in the book. Elizabeth was a woman in a man’s world, and readers will learn what she had to do to maintain that power, and her position without losing respect – that’s not quite the right word, perhaps stature – in her court.

Another one of the benefits of the attention to historical detail is that it adds to the atmosphere in the book, and to the rules of the society Elizabeth ruled, which even she had to abide by. But it also makes for dense reading, and times I needed to read less about historical detail and more about the woman.

One of the odd choices in this book, is that there is no indication of when the story moves from Elizabeth in the present, on her deathbed, to the past and an actual event. It’s jarring to start reading about how she’s feeling in bed, before the story moves to the past, and she’s standing and talking to someone. Granted, there’s so many instances of this, it might just be jarring in a different way if something was inserted to show the change in times.

This wants to be a conclusion to a powerful woman’s story, and it is in some respects, but the historical detail (politics of court) tends to take over the narrative. However, my advice is to understand Elizabeth in this trilogy and what the author is saying about her, readers will have to start with the first book – Just a Girl.  I think it, and the second one, Just a Queen, will make readers understand this Elizabeth, the Queen history remembers better.