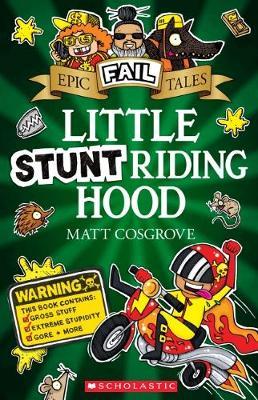 This is the third book in the Epic Fail Tales series, where traditional fairy tales are re-imagined with new events and images. The book is designed to look as though the original story has had new words pasted over the old ones, which is only the beginning of the graphic excitement of this books. Each page has exciting images of the main characters, Little Stunt Riding Hood and the Big Bad Werewolf, as they battle it out in a stunt riding competition that goes off the rails and ends up in a cottage cheese factory. Amidst the illustrations there are also side characters having chats, funny signs and all sorts of extra things to find.

Little Stunt Riding Hood is an exciting adventure, from a stunt race of epic proportions to a secret plot and explosive finale. There is plenty of gross humour to appeal to middle school readers, including farts, belching, vomit and so on. The characters are larger than life, both in the telling and in the graphics. As an added bonus there is an extra story, in cartoon form, at the end of the book: Seven Ninjas, Operation: Breakout, where a group of ninja students attempt to rescue a substitute teacher but things take an unexpected turn.

Although this is an easy to read and exciting chapter book for reluctant readers, parents and teachers should be aware that the two main characters are very disrespectful, with a lot of name calling, although this is in the context of one-upmanship in the race. There is a focus on monetary and celebrity success rather than any positive personal qualities. Also, given the disproportionate number of childrens’ books that have a male character at the centre, it is disappointing to see a story that usually has two strong central female characters converted to an almost all-male cast.

At the end of the book there is a drawing exercise that shows readers how they can convert an image of Little Red Riding Hood into Little Stunt Riding Hood.