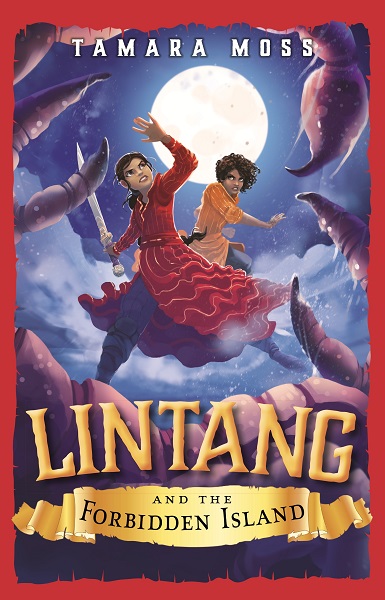 The time has come to visit the forbidden island of Allay.  But first Lintang needs to find her captain, and it seems the only way to get to the Winda is to join – then escape – the Vierzan Navy.  Only then will Captain Shafira set sail for Allay, where the crew of the Winda must uncover what really happened to the country’s missing ruler…

Forbidden Island is the second book in the popular Lintang series, following on from where The Pirate Queen left off.  Lintang, our hero, stands on the verge of adulthood but, as always, there are more tests and trials for her to overcome before she can be granted her greatest wish – to no longer be seen or thought of as just a child.

Moss has expanded Lintang’s world – our protagonist is a little older now, a little wiser; and so the subject matter has been allowed to mature as well.  The reach of the United Regions is growing, and in this book we see more clearly defined themes of colonialism and westernisation – themes that were only lightly touched on in the first book.  Other themes within the book remain closer to home.  Lintang’s world – the home and safety she’s always known – is being eroded by the march of modernisation, and it’s up to her to stand up and fight – just as we would to protect those we love.

Like the original, we have more mythie texts to explore in this book and a host of new creatures to encounter and learn about.  Moss writes with a rich imagination brimming with adventure and characters whose dreams become our own.

The Lintang books (and others like them) are timely, bringing to the fore a new array of strong young women who are headstrong, decisive and absolutely unwilling to let others decide their fates for them. Moss’s Lintang will no doubt be one of those leading the charge!