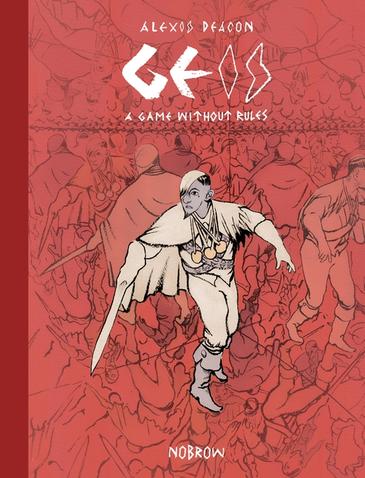 The second test has begun.  Contenders for the new chef find themselves divided against their will and flung into a dangerous game. While the struggle for power continues, Io and Nemas battle with their own identities… but when allies are turned against one another, who can be trusted?

Dark, foreboding and surreal, Geis is a fascinating blend of history and fantasy, weaving magic and mysticism into a world recognisable as not too far removed from our own of many centuries ago.

Not having read the first book in this series of graphic novels, I felt a little like I was being thrown in at the deep end of a vast and sprawling story… I soon grasped the basic premise though and figured out who was who – that Nemas is our reluctant hero; whereas his brother Toras is an unmitigated villain.

There are numerous character dichotomies at play, yet the story never seems too crowded…. Rather, we feel as though we are being gently ushered through the many rooms and hallways of a great castle, bearing witness to the sorcery and spellbinding taking place among its inhabitants.

Geis pits brother against brother, friend against friend, master against servant… there are a great many complex themes and issues being potrayed.  Deacon handles them masterfully, painting a vivid picture of intrigue, magic and madness.  The writing is witty, eloquent and mature without being too impenetrable.  The illustrations are keenly wrought and exhibit a wide array of subtleties and emotions.

There is a certain amount of violence and gore contained within the book, so it is recommended for readers in their later teens and up.

I’ll be looking forward to the next instalment, as I’m eager to see who is left standing at the end of this particular game!