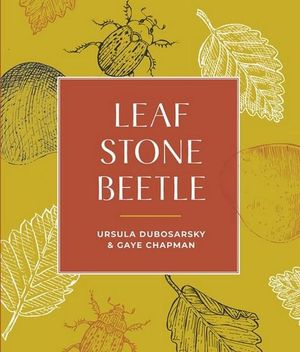 A beautiful production with gorgeous black and white illustrations, there is something of the ready-made classic about Leaf Stone Beetle. An allegorical chapter book for middle primary, it is divided into three sections reflecting the titular ‘character’s’ journeys.

The book begins with a frightening storm which our little green leaf endures. Post-storm the little leaf is the only one left on the tree until it flutters down to the edge of a churning stream.

Similarly, Stone is uprooted by the storm and Beetle, also disturbed, finds shelter with Leaf and later burrows beneath Stone. The three find a community of sorts in each other. With its philosophical underpinning and coverage of the natural world, the book could be used in classrooms to discuss issues of environment, transience and eternity.

The book is published by regional New South Wales start-up Dirt Lane Press which aims ‘to place quality books in the hands of young people unaccustomed to books’. In a radical marketing campaign, copies of the book were dropped around Sydney for people to discover. Recipients were asked to eventually deposit a copy with Mums4Refugees.