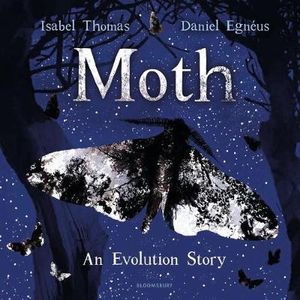 This stunning non-fiction picture book introduces the concepts of evolution and natural environmental adaptation along with pollution and heredity. The lyrical but sparse text, appropriate to the book’s format, is beautifully complemented by Egnéus’s evocation of the moth’s life-cycle and the changing environment over time.

The opening lines set the scene. This is a story of light and dark. Of change and adaptation, of survival and hope. The peppered moth, usually pale salt-and-pepper coloured occasionally produces dark winged offspring, whose chances against their mottle-barked tree homes are less than ideal. The realities of becoming food for another species is not glossed over. But during the period of heavy industrial pollution where everything became darker, covered in soot, dark-winged moths were able to survive better and more of them appeared. As our environments have improved, both moths can now continue.

Text and illustrations depict the generations of moths which have existed in the past and, because of its adaptability, into the future. The concluding double spread has more complex language aimed at older readers and encourages all readers to search for peppered moths when out on their walks. It’s a beautiful package, with a dark blue, black and silver cover which entices readers to pick it up.