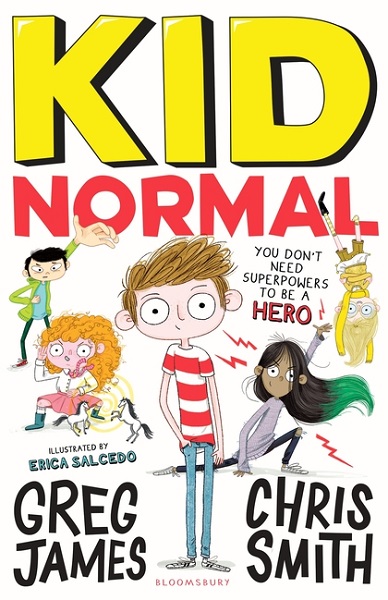 Kid Normal is great fun and one of those novels that would appeal to a variety of age groups:  so while it is aimed at children eight and over, teenagers and young adults will also enjoy its wry humour.

Murph Cooper, the main character, has been mistakenly enrolled at The School. The School is a secret school for the training of young superheroes, who in this case, are known as children with Capes, which is short for capabilities. Once the mistake has been recognised Murph is allowed to stay as long as he doesn’t tell anyone what happens at The School. This is very frustrating for Murph because there is so much he could tell. After all, his classmates can fly, make objects swell and conjure tiny horses from thin air, but when Murph’s mother asks how school was he has to limit his answers to ‘Erm, OK, I suppose.’ He can’t even ask: ‘Mum, I really need to ask you about girls. Is it normal for them to conjure thunder storms out of thin air?’

While attending The School is exciting, it is also an exercise in humiliation as Murph has no special abilities whatsoever. He is just a normal kid. This doesn’t mean he can’t be a hero though and the story’s plot revolves around his adventures, when accompanied by his posse of supposedly minimally talented friends, Murph must rescue The School’s staff and students when they are kidnapped by a half man/half wasp.

Kid Normal is of the fantasy genre, but it also hints at the everyday problems that children have, such as being embarrassed by their mother, bullied by other students or teachers or just having difficulty expressing themselves. My favourite quote in Kid Normal is:

‘Nellie made a small squeaking noise, because words were not her Capability.’

Descriptions like that paint such a vivid picture of poor Nellie.

The writers also make direct appeals to the reader, which is a great technique for making the reader feel a part of the action.

‘You may already know what St Paul’s Cathedral looks like. If you don’t, then please draw a picture of what it might look like and send it to us. We could do with a laugh.’

I really enjoyed Kid Normal and am delighted to know that Murph and his gang will be back for their next epic adventure The Treasures of Amasis where they will no doubt successfully battle evildoers, even with the proviso that Murph is home by half past eight.