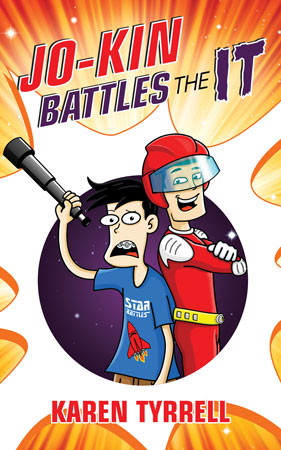 Jo-Kin Battles the It is a self-published space adventure story aimed at eight to ten year olds. Josh is just an ordinary nerdy kid before he answers a newspaper advertisement to become a Super Space Kid and save the galaxy. He goes to Space School, receives extensive training from other children, then goes to space with his new friend Sam and battles aliens. While the book is action packed, its uneven plotting, lack of female characters, and some clumsy writing let it down.

The most troublesome plot issue is the premise of a Space Academy with a seemingly unlimited budget, successfully defending the galaxy, but run entirely by children. Tyrrell offers a few sentences of explanation half way through the novel: “Kids react faster than grown-ups in every situation. Kids are calmer and cooler under pressure” (103-4). It’s difficult to suspend disbelief on such flimsy grounds. The book would have been more plausible if all the adults had suddenly disappeared or been turned into robots or something equally fantastic. Tyrell is obviously committed to writing action-packed material for young readers, however, the blend of realism and science fiction doesn’t quite work in this text.

The book has only three female characters: an overly sentimental mother who cries a lot and bakes, an annoying sister, and a “cute-looking twelve-year-old girl” who needs rescuing by the male heroes (57). After this character has been rescued by the boys she collapses into their arms and kisses both of them, saying “You saved my life” (173). It is very disappointing that contemporary authors are still producing these worn-out, sexist stereotypes for young readers.

Jo-Kin Battles the It is intended to “empower kids with resilience, team building and brain power skills” (back cover blurb). This bibliotherapeutic material is not always well integrated. For instance, Josh tells Sam to prepare for an alien battle in this way: “Try changing your mindset. Create a live video of yourself in your head, winning. [. . .] Replay it over and over again. Remember that awesome feeling of success” (145-6). While this strategy might be useful for young people to know, this dialogue isn’t realistic for pre-teen boys. The book would be more engaging if this didatic element were removed entirely and Jo-Kin simply told a good story.

The strengths of Tyrrell’s writing are fast moving action, silly humour and good use of onomatopoeia. If the vocabulary and syntax were simplified this book could be published as a successful HiLo (High interest, Lower reading level) for reluctant readers. As it is, Jo-Kin could be useful for therapists to reinforce resilience and anxiety management strategies.