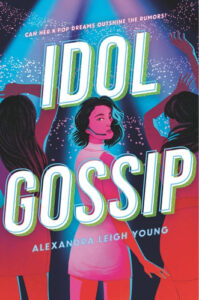 Idol Gossip is the debut novel by Alexandra Leigh Young, journalist. It depicts the story of 17 year old Alice Choy who is living in South Korea while her mother works as a diplomat in the American consulate. Alice loves to sing. One night while singing karaoke Alice is discovered by a K-Pop scout and invited to audition. At the open audition Alice is the only performer chosen for a spot at the Star Academy. She is chosen despite her disastorous dance audition and her inability to understand or speak Korean. This plot point requires a slight suspension of belief but sets up other plot points neatly.

Once Alice arrives at the academy she faces culture shock. The world of training to be a K-Pop idol is far more rigorous than she imagined. In this way Idol Gossip exposes some of the grit behind the gloss of becoming a singing sensation whether it be in K-Pop or any other branded franchise. Further, it explores the theme of having your dreams come true and what that actually means.

The story is interspersed with blog posts by the anonymous ‘V’ who is largely disillusioned by the K-Pop scene but has an opinion on every group and loves a good scoop. These blog posts help to highlight how much is on the line for Alice and her group, A-List.

Overall the story is quite wholesome; there is very little swearing, one scene of underage drinking and all relationships are platonic. Whilst some knowledge of K-Pop would be helpful, Idol Gossip is an enjoyable read even for the uninitiated.