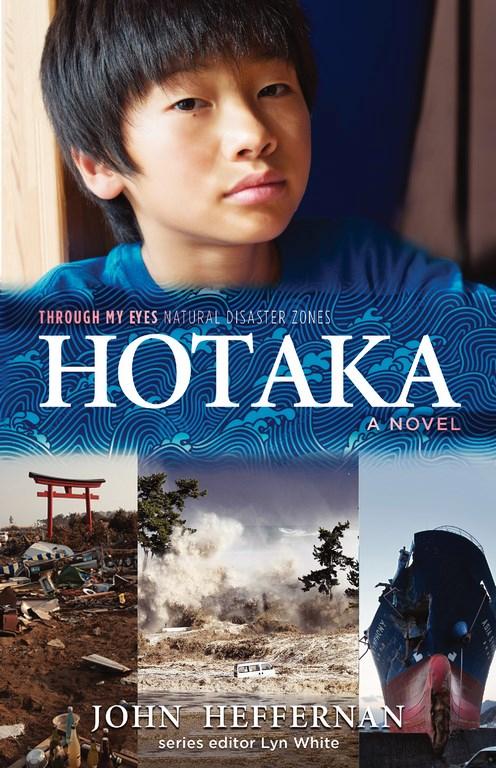 On March 11, 2011, Hotaka and his school friends were cheering on the hero at a puppet show when an earthquake struck. In well-rehearsed fashion, the children filed out and followed their teachers to a safer area. Although the quake still rolled the ground around them, they knew what to do – and what could happen next. Just over half an hour later, a tsunami struck Hotaka’s home town and swept most of it away. In the chaos that followed, Hotaka and his best friend Takeshi bravely tried to rescue people and help as best they could, but the forces were nearly overwhelming.

Jump forward to 2014. The clean-up from the tsunami is still happening. Many people are without permanent homes. The little town has lost its traditional feel, and instead is a patchy village of concrete and tin. Hotaka’s home on the hill is also residence for a boy from his class who lost his parents in the tragedy. So many people died or are still missing that healing is slow throughout the community. Hotaka knows that his friends struggle every day with their losses, so when Sakura battles the authorities by graffiti-ing the ugly sea wall that has been constructed instead of decent housing for the people, he learns that to be courageous is very difficult even if you are doing the right thing.

Heffernan writes intelligently and dramatically of the devastating 2011 tsunami that hit the east coast of Japan with such shattering consequences. He threads Japanese culture throughout, and shapes his characters thoughtfully so their actions reflect the altered world in which they live. The friendship of the three children and the way they support each other is heart-warming. Their battle against the corrupt local government speaks of activism and justice, serving as great models for readers. A highly-recommended book for readers who are willing to be immersed in another culture in parallel with a strong story. For further information about the tsunami, Heffernan has a timeline of events and other resources stated at the end of the book.