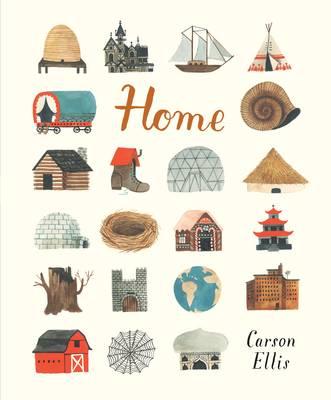 Home is a beautiful whimsical meditation on the notion of homes. A home is more than mere shelter, it is more than a dwelling. It is a personal space created from the resources at hand, its design shaped by the culture in which it is located, its ambiance reflective of the individuality of its occupants.

American illustrator, Carson Ellis, in her debut as an author-illustrator, takes young readers on a tour of homes across history, across the world, through folklore and mythology, and into the realm of imagination. It is a playful journey that teases its little readers to differentiate between reality and fantasy, to speculate on ownership and usage, all the while appealing to their sense of wonder. She mixes up her homes; at times she is informative then she is droll and she juxtaposes the fantastic with the prosaic – the home of a Japanese businessman faces the imagined home of a Norse god, Indian palaces are contrasted with the old woman who lived in a shoe and readers are facetiously shown that French people live in French homes. Mostly the reader sees the exteriors but occasionally is allowed a peek inside, such as the underground lair of fairytale robbers and the kitchen of a babushka.

The text, delivered in a bold handscript, is utterly simple: an informative statement of a few words, a label, a question to the reader. It complements superbly the charm of the retro naïve style of the illustration. The pages are bold with white space-enhanced pictures of a flat soft palette, exaggerated scale and compositional simplicity, each mesmerizingly static in its depiction of the homes and the residents in their activity.

An excellent picture book to stimulate young children to imagine and wonder, perhaps to make up their own stories around the homes and the folk who may live in them.