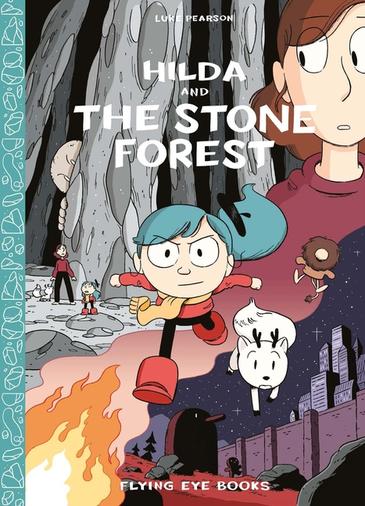 Hilda is a young girl with blue hair who just can’t resist the call of adventure.

The latest in a series of “graphic novel” style books charting Hilda’s adventures, The Stone Forest takes Hilda tripping into the underground caves, tunnels and mysterious lands beyond the boundaries of her home, the city of Trolberg.  This time, Hilda’s mother is along for the ride… and she’s none too happy about it.

Hilda is accompanied her on her journeys by a variety of magical friends – her friend Frida; a small animal named Twig who is kind of a dog, but not really… she has a little brother named Tontu, who has the ability to pass between the real world and the fantastical world of trolls and strange beasts… there’s a sort of crow that can grow and shrink in size… and of course, there are the mysterious and dangerous trolls themselves!  We like Hilda – she is the star after all – but we definitely feel her childish petulance and that she has much to learn if she would only stop and listen.  She is full of bravado and courage, but also pride, and I get the feeling that as the series of books progresses, we will see the character of Hilda develop and mature as she gathers more experiences and learns more valuable life lessons on her travels.

The world of Hilda is a curious (but unquestionably effective) blend of Icelandic folklore and Japanese storytelling (Miyazaki is definitely an influence here with its themes of travel between worlds, transformation and young protagonists facing seemingly impossible odds).

My five-year old was drawn to the visuals of the book, but I’m not sure he’d be quite up to the story if I was to read it to him.  Perhaps after a few years when he’s reading by himself and is beginning to get curious about the kinds of stories Pearson tells, then I think he will really engage with it.  That said, it’s far from a simple children’s fable – this reviewer is pushing 40 and I found it utterly charming and fascinating!