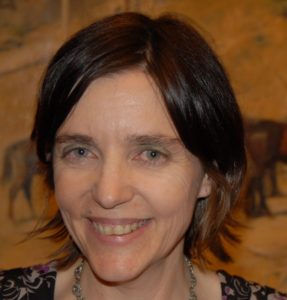 Ursula Dubosarsky’s latest novel The Blue Cat is set in World War II Sydney. It captures the fear and danger of the time authentically, but as well, it creates and maintains an air of mystery and intrigue. Here are some thoughts from the author about its origins and meaning.

The Cat is Blue 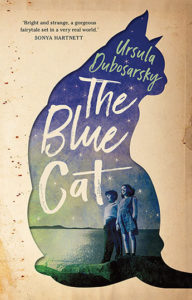 I wrote the poem that appears at the beginning of The Blue Cat during a long flight home to Sydney from the Berlin International Literature Festival.  The cabin was dark. Everyone was asleep. It was like being the only one still awake in Sleeping Beauty’s castle. That’s when the blue cat slipped into my life. The mysterious stray steel-blue cat that roams enigmatically, menacingly, about the pages of this novel.

The Blue Cat takes place in Sydney during the first few months of 1942, when the threat of a Japanese invasion of Australia was frighteningly imminent. There is 10 year old Columba, her bossy best friend Hilda, and the silent new boy at school, Ellery, a refugee from Europe. And then there is the CAT. Where did it come from? Where is it going? Is it real or is it a ghost?  Is it protective or predatory?  And what does it want? Because it’s certainly intent on something…

I wrote The Blue Cat over a period of several years – parts of it dripped out very slowly, other parts more a running stream. The process, like all my novels, was largely a question of trying to work out what I wanted to say, distilling the essence from the great swirl of stuff washing around my mind – deciding what stays, what goes.

I’ve always been a big admirer of Agatha Christie, how every line, even when it seems to have no relevance at all, is in fact pertinent to the outcome of the story. It’s like a jigsaw puzzle with hundreds of pieces that may look as though they don’t join, but in fact as you push them around the table with each other, slowly you realize they do in fact fit together.

For me, everything in The Blue Cat is relevant to its essential meaning. Although it is true that when the puzzle is at last finished and the final tableau is revealed, it yet holds its own mysteries and secrets. Nothing is certain, not even for the author herself

Thanks to Allen & Unwin and Ursula Dubosarsky for this intriguing post. Review of The Blue Cat coming soon.