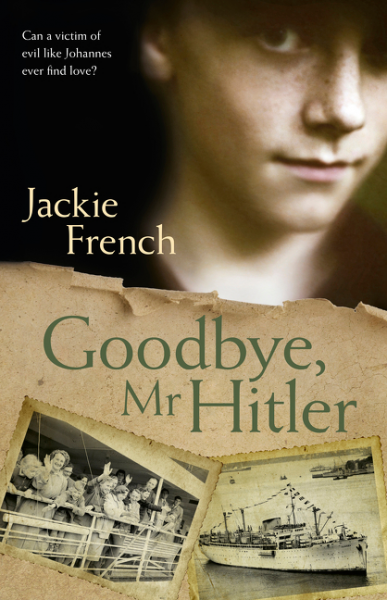 Goodbye, Mr Hitler is French’s third book about young people impacted by World War II Nazism.  Main character, Johannes, is a concentration camp victim, so his experiences are quite horrific.  With French’s talent for evoking strong imagery her vivid descriptions of Nazi atrocities affected me quite emotionally, so I warn that this book is not a gentle introduction for children to the horrors of war or other human atrocities.

Johannes is a pre-adolescent boy of German ethnicity living in Poland during World War II.  He is shocked when he and his mother are forced into overcrowded cattle cars and transported to Auschwitz.  Until then his worst fear was the imaginary frightening ogre of the storybook that his Opa used to read to him.  With an effective literary device, Johannes’s experiences in the concentration camp are described as the ogre becoming his reality.   In one sense Johannes is fortunate in that he is imprisoned within a few weeks of the liberation of the concentration camp which makes his survival possible and a plausible element in the story.

Frau Marks, another main character, serves as a nurse in the concentration camp after being arrested for her part in hiding Jewish children. Johannes and Frau Marks become strongly bonded when she helps him survive the death march in the freezing cold.

When the Nazis abandon the concentration camp Johannes meets Helga in the barn in which he seeks refuge.  Helga is tough and streetwise and knows how to forage for the food that will keep her ailing mother, and Johannes, alive.  But Helga has a dark secret which is only revealed at the end of the book.

Whilst the first part of the book is at times emotionally intense with descriptions of the unimaginable adversities that the three experience, the factor of their resilience, courage, strong bonds to each other and strong sense of humanity do provide an element of optimism.

The second half of the book has a lighter tone as the three main characters are re-united with loved ones and, happily, all are granted asylum in Australia.  They take comfort from the support they can give each other as they rebuild their lives here and slowly begin to let their guard down.

I am always impressed with French’s expressive prose, but especially in this book.  She describes Johannes’s impressions of Auschwitz when he first arrives:

“Light that swallowed colour, swallowed the world.  Then Johannes saw beyond the light to night, darkness and barbed wire”.

Later in the book she describes his feelings of vulnerability on the voyage to Australia:

“They might have been heading anywhere. Once again they were just parcels, bundles of meat, helpless. DPs to be taken where their captors willed.”

To sum up, this is a serious book which tells an important story with skilfully crafted language and believable characters and events.  I recommend it as a text for young people in upper primary or early high school to read and discuss with an adult.

A Teaching Guide can be found on the HarperCollins Australia website.