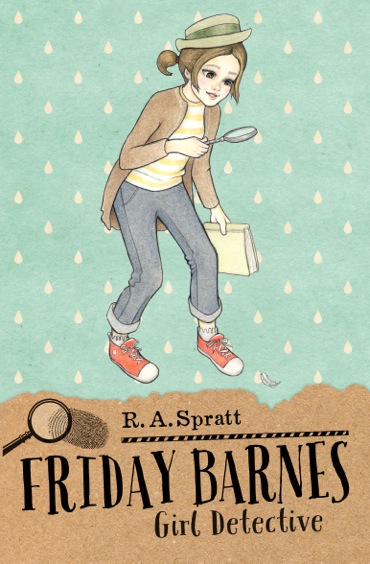 Friday Barnes is an 11-year-old girl, a late surprise in a family of four older siblings.  Her academic parents have virtually left her to her own devices.  This lonely bookworm works with her uncle to solve a large theft and with her reward decides to send herself to an exclusive boarding school where she is constantly surprised by her fellow pupils and continues to solve a variety of mysteries.

There is some quite sophisticated humour in the descriptions of the school, its students and teachers, all compared by a member of staff to Lord of the Flies.  The story moves at a face pace and if the characters are not very original, Friday’s adventures certainly focus the attention.  However the book poses something of a conundrum as the cover illustration, the large typeface and generous line spacing all suggest a novel for younger readers while much of the language suggests a book for older, more experienced readers.  Introducing youngsters to new words is an important aspect of good writing but on almost every page concepts are used that most primary-aged children would be hard-pressed to understand from the context; a few examples: existential, illicit, ironic, encumbrance.  Nevertheless it is to be hoped that older readers will ignore the book’s design and pick it up.  The novel ends with Friday’s surprise arrest and with a promise that the story will be continued in the sequel to be published in 2015.  Ages 12-14.