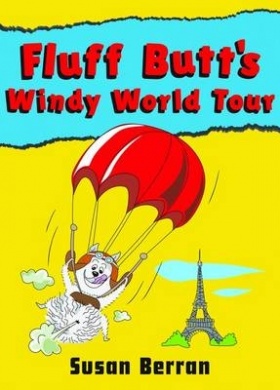 Fluff Butt uses a rather unusual method to get around the world. Told with Susan Berran’s awesome childlike rhythmic chant, using some not quite rhyming words, this story is gross yet captivating.

The only negative I found was the in the depiction of Fluff Butt himself. Every image and character, except for Fluff Butt, appears to be rendered colourfully and with thought and skill, but Fluff Butt seems an incomplete creation. The illustrator appeared to have trouble with the monochromatic nature of Fluff Butt – using only black and white to draw Fluff Butt’s expressions and place him in each scene left him somewhat one dimensional.