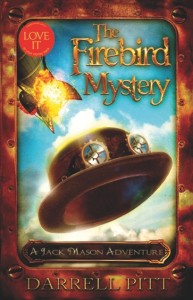 This book, a complicated mystery story, shows many signs of the author’s fascination with Victorian fiction, particularly Conan Doyle’s Sherlock Holmes mysteries.  It is the first in the Jack Mason Adventures.  Jack is an orphan, living a miserable existence in an orphanage where he is bullied by bigger boys.  Miraculously, he is rescued and sent to live with the famous detective, Ignatius Doyle, to become Doyle’s apprentice.  He is thrown into the midst of a mystery almost immediately and the book then becomes a kind of Victorian adventure story.  However, the London in which it is set is not one the Victorians, or the succeeding Edwardians, would recognise.  It is actually set after the ‘Great War’, and is, in effect, a London of the past and the future.

When a scientist goes missing, Doyle and Jack (with the aid of his daughter) must find him.  Doyle gives a series of Holmes-ian descriptions of people along the way and teaches Jack to hone his observational skills too.  Jack quickly feels at home with Doyle who becomes both a friend and a kind of father-figure.  (Jack’s own parents were circus acrobats who died in an accident during a performance).  Jack’s new sense of belonging and comfort is an important element of the book.

Looking for the missing man reveals a tangled web of intrigue and evil, including secret societies with a weapon which resembles an atomic bomb and the potential to destroy London.  Threats have come from Doyle’s nemesis, Professor M, that he will use it if certain conditions are not met.  Jack is the hero of the book, carrying out all sorts of derring-do but there are a number of feisty girls in the book, one of whom is a villain!  The issue of women’s rights is raised a number of times and Scarlet, the daughter of the first man to go missing, becomes an assistant to Ignatius Doyle too.  This book is a rollicking read but does require a fair degree of suspension of disbelief.

Read an interview with author Darrell Pitt in the Interviews section.