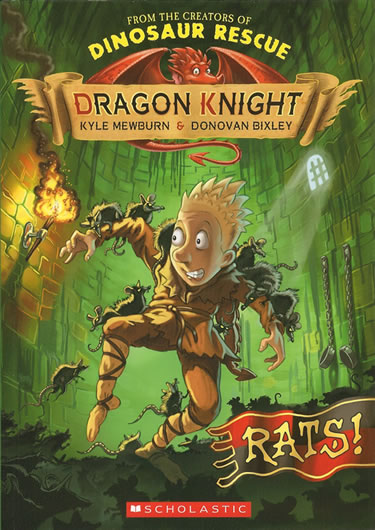 Merek is a young lad whose real form is a dragon if he shape-shifts, though on many occasions that goes awfully wrong. We first meet him clinging to a spire that’s on fire (though that doesn’t really worry dragons), but if he shape-shifts and escapes, he will be seen for what he is and all will want to kill him for humankind hate dragons. He wants to attend Knight School and must, whatever the circumstance, be circumspect! The rest of the book describes in amusing, scatological and sardonic ways how he got to this position and indeed if he succeeds in overcoming or being rescued.

It is a clever use of the circular plot structure (repeated in subsequent book where Merek finds himself locked in a rat cage) where an exciting dilemma is used as a bait or hook for the reader to want to find out how the circumstance came to be. In the course of the story we meet his helper (a young girl Brine who must disguise her gender if she wants to get into the Knight School too) and his nemesis, Master Percy Crumble, a spoilt brat of the overarching Lord Crumble. There are a range of absurd characters and places that collectively make the medieval setting a farce and comedy of errors.

Interspersed with the narrative is a range of inserts/maps that seek to give information for contemporary readers about life in these “primitive” times, information that is mixture of fact and absurdist fiction. Great stuff! This book will appeal to children (boys and girls) who revel in the portrayal of the naughty as opposed to the correct and where adults are made to be seen to be rather stupid! Confident readers in the middle primary school will love them!  Teacher notes can be found on the Scholastic NZ website, for both Fire! and Rats!.  The series is also supported by a website.