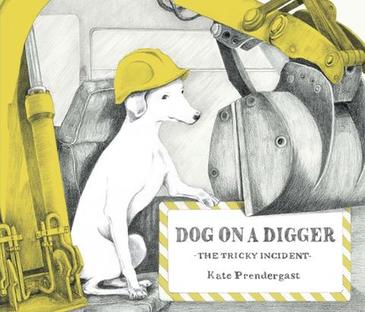 This is a wordless picture book telling the story of a loyal and resourceful dog. Dog wakes first in the morning and rouses his master with a lick. Both he and his master don yellow safety jackets and go to work with the digger, moving building debris. They buy lunch from the snack bar on site, followed by greedy seagulls. The snack bar owner has a small, fluffy dog which, after lunch has disappeared. After looking everywhere, Dog finds the little animal has fallen into the canal and is caught on a tree branch just above a fast-running outlet. Various unsuccessful rescue attempts are made until Dog makes it clear to his owner that the best method would be the digger; and so it proves. Owner and little dog are reunited, and the penultimate illustration is reminiscent of a family photo with the two owners standing close together with their dogs in their arms. The final illustration is a ‘close-up’ of one large paw holding down the safety jacket of a very small and very active dog.

The illustrations throughout are delightful and detailed. The animals are depicted with distinctive personalities, without being anthropomorphic. The machinery is carefully drawn and will have great child-appeal. The predominantly black and white illustrations have areas of colour to highlight particular objects such as the bright yellow safety jackets on Dog and his master. These colours draw the viewers eye and provide a vector to follow the action, such as when Dog races across the site and up a set of stairs.

The endpapers are beautiful and evocative showing a night-time view the site where Dog and his master live. Night creatures – an owl and a fox – make the otherwise deserted place their own at night. The background colour to the endpapers is a blue-grey and the eerie stillness of these illustrations is a wonderful contrast to the busy-ness of the day time activity depicted in the main part of the book.

There is lots to see in this book and a wonderful story to share and tell. Pre-reading children will be able to develop their story-telling and those who are already reading will also enjoy describing the action and engaging with the drama and suspense.