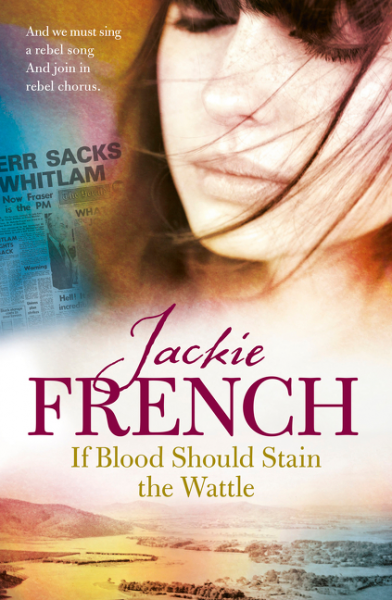 Jackie French’s new historical coming-of-age novel, for readers in the upper range of the Young Adult age span, covers the tumultuous political events in Australia from 1972-1975; from the election of Gough Whitlam’s Labor government until the dismissal of the government by then Governor-General, Sir John Kerr – a time that changed the political landscape in Australia forever.

French sets the scene well, using the events in Canberra as a background to the lives of her main characters who live in Gibber’s Creek. Nicholas, who has been badly wounded in Vietnam, a deeply unpopular war in Australia, is standing as a candidate for the Labor Party in the 1972 election. Gibber’s Creek is really ruled over by the local matriarch, Matilda Thompson. It is she who asks her great-granddaughter, Jed Kelly, to help with Nicholas’s campaign and to write political articles for the local newspaper, which Matilda owns. Jed is reluctant to do this as she has previously had a love affair with Nicholas and was deeply hurt. But her great-grandmother brooks no opposition and Jed gradually makes a life for herself in the town, even meeting and falling in love with the slightly eccentric Sam.

The 1970s was a time of great political activity and activism and, as such, community is a strong focus in the book. People are strongly supportive of each other although rather wary of those living just out of town on the commune. For this was a time too, when hippies happily lived on communes shunning the material things of life; and every event in country towns was followed by a supper of ‘bring a plate’ – often accompanied by a glass of ‘chateau cardboard’ as cask wine was often called. There are hippies living near Gibber’s Creek, and it is in their community that Jed meets Sam. He, however, is not what might be described as a dedicated hippie but is really concerned about sustainability and environmental issues. Her relationship with Sam demonstrates Shakespeare’s adage about the path of true love not being smooth but, after lots of blocks and detours on that path, they do come together by the end. The book also explores the nature of love and how we can love in different ways and at different times and even how love can be expressed in loving one’s country, the environment and one’s home.

There is a strong sense of place and home in the book and life in an Australian country town of the time is strongly evoked. Home is important to Jed, who has had an unhappy and disrupted childhood. She has not known the security and warmth of a home life or even, at times, of a home at all. The word ‘home’, especially when said by her grandmother, has a special resonance for her and is not something she ever takes for granted. Home plays a significant part in the life of Jed’s younger friend, Scarlett, too. She has been living in an institution for most of her life, put there by her parents who could not cope with a disabled child. This was a warm and loving children’s home, but did not constitute home in the way her later life with Jed does. The unexpected arrival of her mother, who has long ignored her, offering her a ‘home’ with her family, is unwelcome to Scarlett, who believes that home could never be with someone who rejected her.

The characterisation is strong in this, as in other books by French. Matilda is an endearing and memorable ‘grande dame’, Sam is a complex young man, Jed is a signifier of the new paths women were carving out for themselves in the early 1970s as feminism changed lives, and Scarlett defies any stereotyping of a young person in a wheelchair. A large cast of minor characters flit to and fro across the pages too, and all are believable and well-drawn. There is even a hint of the supernatural as both Nicholas and Jed ‘see’ characters from the past, characters who are very real to them and, in their quite detailed construction, become convincing to the reader.

Jackie French lived through the events that form the background to this book, drawing on her first-hand experience in Canberra to write with great feeling about ‘the Dismissal’. This is an engaging and interesting read.