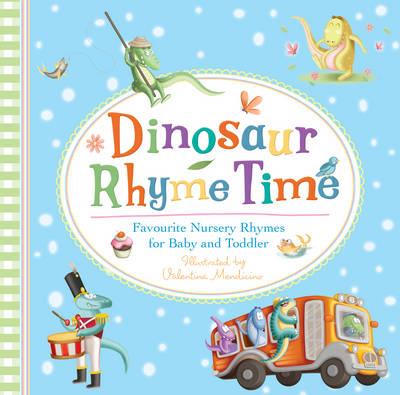 Little children are endlessly fascinated by dinosaurs, as much as they enjoy the rhythm of nursery rhymes.  So it is perhaps not such a strange idea to put the two together as they appear in this delightful little compendium of nursery rhymes.  Mendicino’s dinosaurs are not the fearsome, rampaging carnivores of the cinema, they are cutely benign creatures of colourful pastel hues, coquettish eyes, sporting sun hats and parasols and who delight in family activity.  In cameo pictures framed against wallpaper-patterned leaves they play ‘round and round the garden like a teddy bear’, sit on stone bridges hoping to catch ‘a fish alive’, rest under trees eating ‘curds and whey’, and so on.  Baby dinosaurs feature as well, most notably in the revelation of a baby dinosaur emerging from the cracked shell of Humpty Dumpty.  The book comprises only nineteen popular rhymes but that is probably enough for infants, it is the dinosaurs that will enthrall them.