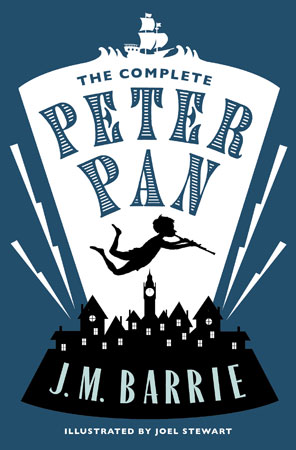 Peter Pan first began as a play written by J.M. Barrie in 1904. It was hugely successful and he decided to capitalise on his fame and wealth by penning the story as a book called, Peter and Wendy, in 1911. The story is well known and has had many adaptations; from musicals to Disney animations and films, but does the story still stand up? The Complete Peter Pan has the play and the book, as well as Barrie’s inspiration behind the story, biographical notes, information about the characters and other writings. Reading the story in 2016 was interesting. I remember as a kid being enthralled by the flying kids and the island but disturbed by the killing of the Indians and how the kids seemed to leave their parents so easily. What bothers me as an adult is that outdated and stereotyped gender roles are so firmly entrenched. Wendy’s whole purpose for being taken to Neverland is so she can be a mother to the lost boys. She spends her time cooking and cleaning and darning socks while the boys have all the adventures. Barrie was also writing over 100 years ago, so the language is at times confusing and stuffy. The idea of children who can fly and have great adventures will still be appealing to young readers, but the language and stereotypes may get in the way of truly enjoying this book.