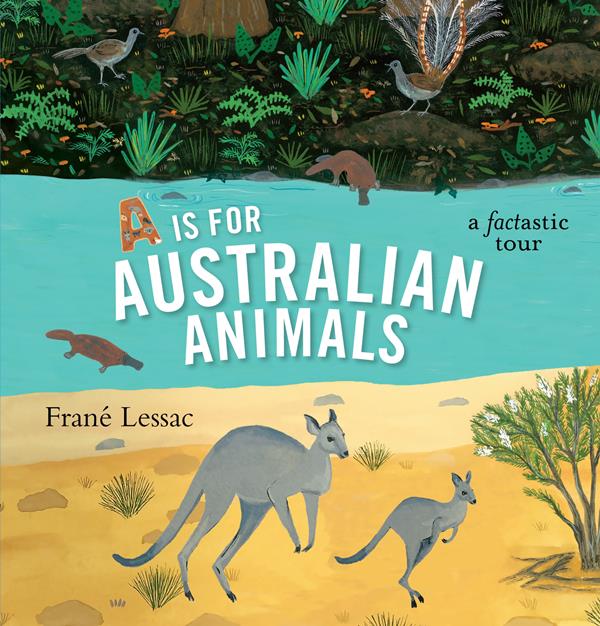 This is a lovely book to introduce young children to both the alphabet and a selection of Australia’s unique native animals. Each page is devoted to one letter and introduces one, two or three animals whose names begin with that latter. All the popular animals feature, including the kangaroo, koala, platypus and wombat, alongside some of our country’s perhaps lesser-known critters, such as the bilby, numbat and Ulysses butterfly. I was disappointed the cassowary was omitted, but our country has so many amazing creatures, I can forgive not including them all in just 48 pages.

The illustrator has chosen a palette of colours found in the Australian landscape – blues, greens, browns and ochre – and has drawn the animals in their natural environments. While youngsters may prefer to just look at the pictures, the book has been cleverly designed to make it easy for parents to casually point out parts of the illustrations and read the interesting snippet that relates directly to the picture.  For example, a picture of a crocodile leaping out of the water is paired with text explaining how high they can leap and why they do so.

This would make a wonderful addition to every Aussie kid’s bookshelf or a lovely souvenir for children (or adults) visiting from overseas.

A is for Australian Animals is a companion book for A is for Australia, which was a notable book in the 2016 Children’s Book Council of Australia Eve Pownall Award for Information Books and winner of the 2016 Crystal Kite Member’s Choice Award.