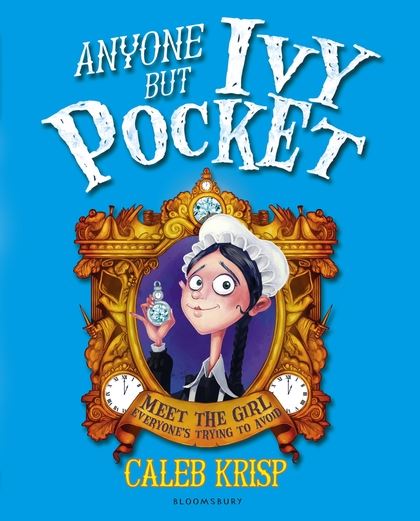 Anyone But Ivy Pocket has been recommended for fans of Lemony Snicket books, but I, being of a different vintage, also find her similar to the children’s picture book character Amelia Bedelia, who was a housekeeper who took everything literally. Both characters demonstrate a British type of wackiness and both are servants who unintentionally make life very difficult, even dangerous, for their ‘betters’. This leads to lots of very enjoyable slapstick moments. There is a major difference between Ivy and Amelia though; Ivy has an enormously high opinion of herself and a strong maternal instinct toward the long suffering people she is supposed to serve.

The story begins with Ivy’s employer, a countess, fleeing the country to escape Ivy. Her farewell note begins:

‘As you can see, I have gone. Do not follow me. I repeat, DO NOT follow me!

‘I am sailing for South America for no other reason than it is far enough away from Paris to ensure that I never see you again.’

Not that I am unfamiliar with Lemony Snicket books; my oldest son was enamoured of them and Ivy certainly has the same wonderful turn of phrase:

‘Like many true aristocrats, the Countess has a drooping bottom lip and no real chin to speak of. This makes eating soup both difficult to achieve and unpleasant to behold…’

Anyone But Ivy Pocket has lots of adventure; murders, ghosts, dangerous monks, jewellery with magical powers, another world and people not being what they seem; at least to Ivy, who is a bit thick that way; readers will have no difficulty recognising the real villains.

It is hard to know what age group to recommend for, as Ivy always talks as if she swallowed a dictionary: perhaps 10+,  with the + reaching to age of 100 and over. I certainly enjoyed every page and I can’t wait for the sequel.

A Teacher’s Guide is available on the Bloomsbury website.