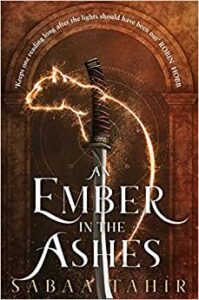 Elias and Helene are about to graduate after 15 years of training to be Masks, an elite soldier group, in this dystopian world know only as the Empire. Elias is hoping to escape from the Academy where they’ve lived through their training and find freedom outside. On the eve of graduation and of his escape attempt, he is visited by an Augur, a supernatural being who is in charge of the process for determining a new Emperor. The Augur – who can read thoughts – convinces Elias that the way to freedom is not the one he’s chosen but through the competition for Emperor.  The two closest friends, Elias and Helene, have to compete against the two class bullies for the title of Emperor. The trials are demanding and distressing and require the contestants to re-evaluate their loyalties and strengths. And what part is the Commandant, the cruel, unscrupulous  and ruthless woman in charge of the Academy playing in all of this? Elias is her son, but she is certainly not doing anything to help him.

The plot of a group of people pitted against each other and various trials set by someone outside that group is not a new one, but this ones is convincing within the constructed world of the Empire. The trials reveal a little more of each character, both to themselves and to the reader.

Into the mix comes Laia, whose parents have been fearless Resistance leaders but who regards herself as the very opposite, as fearful and far from brave. Her beloved brother is taken by a Mask and imprisoned and Laia makes contact with the Resistance in order to try to have him freed.  The Resistance, however, drives a hard bargain and Laia has to infiltrate the Commandant’s household in order to spy for the Resistance.  Ultimately Elias realises that he really does not want to become Emperor but that the competition for the title is the best way to gain the freedom he craves.

The book has analogies with other totalitarian regimes, both fictional and real. The ruling class rules by fear, violence and intimidation; they have disenfranchised an entire group of people, in this case it is the Scholars and minority groups who are enslaved. Lives are considered cheap by the Masks and the other Martials as the slaughter of rivals in the fight to become Emperor demonstrates.

The book poses questions on the nature of courage, asks what is freedom and challenges notions of loyalty. It is thus a thought-provoking book, although not without some faults. There are occasions when the writing, particularly when describing the relationship and interaction between Helene and Elias, slips into something close to the language of the popular romance genre. There is also an unfortunate misuse of the word lay when grammatically lie is correct. No doubt this will be rectified if the book is reprinted.

The book is set up for a sequel as the ending is quite enigmatic, with Elias and Laia apparently managing to escape to freedom, although this is by no means certain.  Readers who enjoyed this book will no doubt eagerly await the sequel.