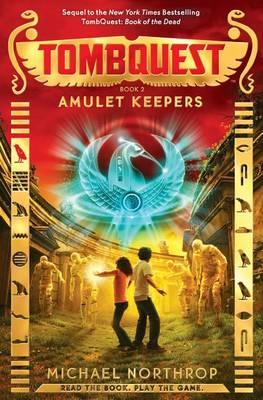 Amulet Keepers is the second episode in a fast-paced Tombquest series. It is possible to read this book without having read the first but it would make more sense to start at the beginning to flesh out the back story. The first book, Book of the Dead, was set in New York where Alex’s mother disappeared after using the ancient Egyptian Book of the Dead to save him from terminal illness. She also unleashed several terrifying ancient evil Deathwalkers, the first of which is defeated in the first book.

The second book opens with Alex and his best friend and co-conspirator Renata on board a plane to London where another Deathwalker is on the prowl. They have come at the request of Dr Priya Aditi from the British Museum, who has worked out what is happening to the missing people, and also met up with Alex’s athletic cousin, Luke, who comes in very handy in several sticky situations. After an action-packed plot which also includes the off-page demise of Dr Aditi, the climax comes in Highgate Cemetery. However Alex’s Mum has still not been found and the ending is left open for Book 3, Valley of Kings.

Scholastic has developed an online game to accompany the books and this is how the books read – lots of action, supernatural elements in a contemporary setting and young heroes out to defeat the bad guys despite the odds. This book is a good example of its type and will hopefully hook a large number of readers who are keen to find out what happens by devouring the rest of the series. It may also be excellent reading ‘bait’ for reluctant readers.